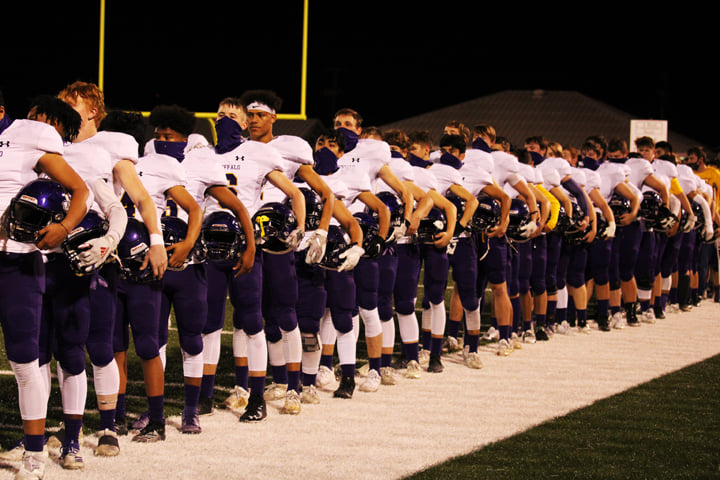 ▲
The Bison stand at attention during the National Anthem before their game against George West.
menefee

▲
The Bison stand at attention during the National Anthem before their game against George West.
menefee

The night sky contrasts with the vibrant group gathered on the visitor’s stands as the Bison football team sprinted through the tunnel at the Brahma Memorial Stadium. Arms extended into the air, they shouted and screamed. A Bison victory was worth the three-hour trip to Hallettsville to play against George West.

“All of the cheerleaders were excited, we listened to music and got pumped up for the game,” senior Sydney Lebel said. “I think everyone was hoping for the outcome we got and I’m actually really pleased with the way it panned out. The game was never boring and everyone was on their toes the whole time.”

The first quarter was a success for the Bison. Senior Eric Beshears gained 36 yards and Senior Brett Hoffman made a 21-yard touchdown run and were up by 7. The Longhorns scored a touchdown, but Hoffman countered with a 13-yard touchdown pass to junior Ethan Williams, making the score 14-7.

“We knew it wasn’t going to be easy in the second round but we stood our ground and stayed on course at a steady pace and kept the game in our hands,” Beshears said. “After this round, win or lose I know we put our best on the field and our hard work will be worth it and it did.”

During the second quarter, Hoffman made a 37-yard gain, but the Bison were unsuccessful in stopping the Longhorns from making two touchdowns. Hoffman came back with a 24-yard pass to sophomore Kyle Harrison, but the Longhorns caught up to the Bison, making the score 28-21.

“They were a good team; I knew at some point they would fight so I told my teammates don’t get too high or down on yourself,” Hoffman said. “Stay calm and play as hard as you can.”

After the halftime performance, the Bison took the field and the Longhorns were soon trailing. The Longhorns’ attempt for another touchdown was successful, but Hoffman makes a 9-yard pass to Harrison, followed by a field goal by senior Francisco Saldana, making the score 38-28.

“They kept trying to keep up with us; we knew they shouldn’t have but we just came out and did what we had to do,” Harrison said. “Our team knew we could beat them so we just went out there and played. Throughout the game, I stayed focused and stayed on my grind to get four touchdowns.”

“Our mentality was the same as every game, just go into the game and leave it out all on the field,” Hoffman said. “We worked hard to add points to the scoreboard and move to the next round, and we’re not done yet.”

The boys will play the Roger Eagles Friday night in Waco in hopes of making it to the fourth round of playoffs.