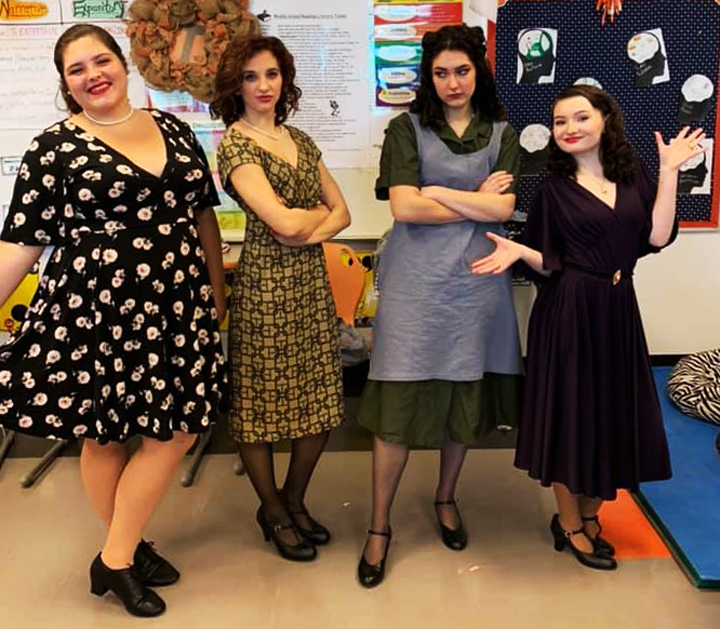 After last-minute touch-ups and silent prayers, the students made their way onto the stage for a dramatic performance. Their hard work and dedication would soon pay off.

The One Act Play cast and crew traveled to Teague High School for their UIL district competition last Thursday. A total of seven teams competed, but only three would advance to bi-district. Buffalo placed first overall.

“My initial reaction was a good, loud scream,” director Melonie Menefee said. “I was shaking too hard to text the people I was supposed to tell; it was total excitement!”

The theatre class held auditions in December and started practicing at the beginning of the semester. They also had a lock-in and overnight rehearsal the weekend before the contest.

“We involved the cast and crew on a lot of our decisions from the very beginning,” Menefee said. “I think that is what has made it a great production. Mrs. Villarreal and I wanted this to be a production that everyone had a part in.”

The company performed These Shining Lives, the story of a group of women who fought against the company that valued profits over the safety of their workers; the women painted watch faces until the radium in the paint they used made them too sick to work and eventually killed them.

“We have so many rights and freedoms in this country that are there because someone in history stood up for what is right,” Menefee said. “This play tells one of those stories. These women made huge strides in assuring safety for workers. They were incredibly brave.”

“The whole cast did great, but I think Ashley really stood out,” Daniel said. “She is one of our strongest actresses in the class, and she gave a good performance.”

As for the crew, sophomore Saloni Jariwala was in charge of lights and sounds. Although she’s fairly new to producing behind-the-scenes, Jariwala received a tech award.

“I messed up a little but the judges didn’t seem to notice,” Jariwala said. “I was excited to receive the award, but I was also nervous to go on stage.”

The students are now getting ready for Bi-District on March 26. The theatre class also plans on having a community showing soon.

“I’m looking forward to performing this play at our high school,” Daniel said. “Although we’re really focused on doing well at Bi-District.”