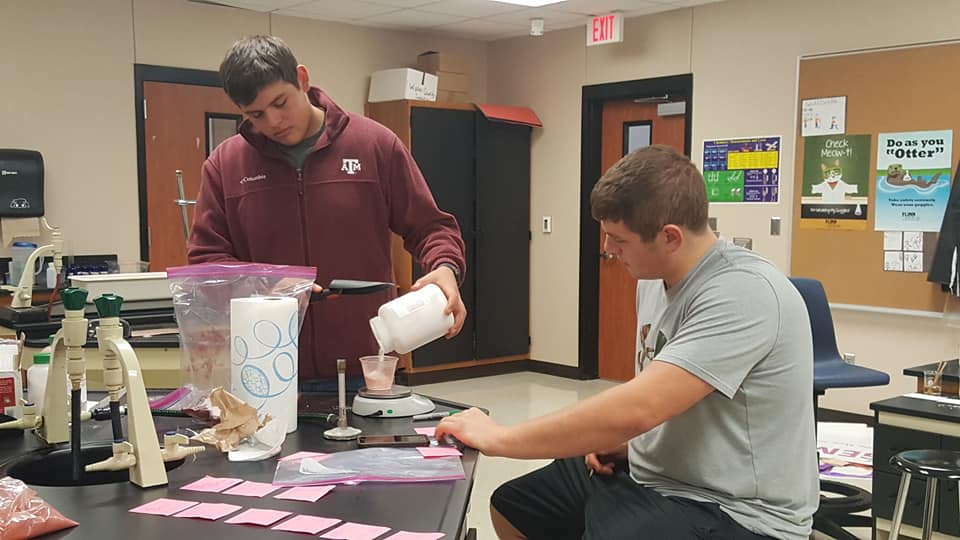 One small step for high school students, one giant leap for Martian Soil.

Scientific Research and Design is a new class offered at the high school taught by Mrs. Cox. In class, students are able to select projects that interest them and are allowed to pursue them throughout the year; some students have picked from a variety for projects: community gardens to beekeeping.

“This class is really cool because I never expected anyone to come up with a project that deals with Mars,” junior Betsy Martinez said. “He made a good choice when picking out projects, and I really hope it turns out good.”

Out of inspiration from the movie The Martian, junior Asa Henson had discussed different projects in class where he was originally going to grow different grasses for use in cattle grazing but then senior Jeffery Pokryska had the idea of doing the project on Mars conditions.

“When Jeff first mentioned the idea, I was kind of ‘Yeah, right? Mars is a totally different planet and you want me to replicate it’,” Henson said. “Then on a whim I googled it and I saw a similar yet a lot smaller in scale project and I realized it wouldn’t be too difficult to do.”

The steps the group, which includes Pokryska and senior Landon Folsom, has taken so far have been synthesizing Martian soil through the use of NASA data that has been collected from their Mars Rovers. They are currently working on the construction of an MRS, Mars Replicator System, which is a part of the larger Mars Vitality Project.

“My overall goal for this project is to prove the viability of certain crops in a martian biosphere,” Henson said. “I took the data for the soil from the NASA Martian Rovers and we then combined all those elements together; I have gotten extra help in the lab from Jeff and Landon.”

After completing this project, Henson plans to take it and present it at the FFA Science Fair during summer.

“I think if I’m able to collect enough data then this project will do really well,” Henson said. “The scope of the project is fairly large being I’m attempting to replicate a completely different planet and if I pulled it off like it’s currently planned to then it’s going to be a head turner for sure.”