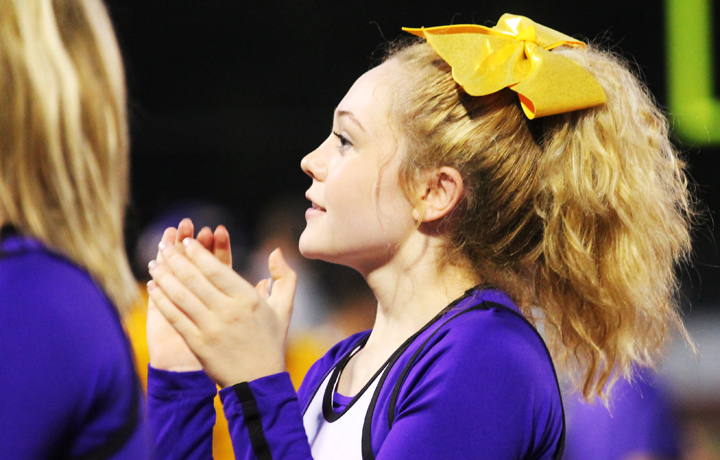 “Just smile and be pretty.”

This is something that sophomore Glori Cozart hears every once and a while because of her infamous “blonde moments.” However, there is more to Cozart than meets the eye.

“Honestly, when people say this to me, it can make me mad or upset,” Cozart said. “Just because I ask dumb questions sometimes, that doesn’t mean that I’m stupid; I’m just curious.”

This has only spurred on one of Cozart’s main pet peeves: judging a book by its cover and making assumptions.

“I absolutely hate when people judge people based on their looks,” Cozart said. “When I first moved to Buffalo, everyone thought I was snotty, a liar, or stupid just because I had a squeaky voice, a sparkly sequin backpack, and didn’t talk to anyone; they just all assumed stuff without knowing me.”

Not only is Cozart opinionated, but she voices those opinions while participating in school activities such as Student Council, Spanish Club, FCCLA and Varsity Cheer. Out of all of these extracurriculars, Cozart said enjoys competition cheer the most.

“I love cheering with Glori because she’s such an amazing person,” sophomore Gracelynn Dawson said. “She’s definitely a great base in stunts, and there is never a dull moment around her; she is very inspiring, and I know I can talk to her about anything.”

When she’s not cheering, Cozart can be found spending time with her mom, whether its taking care of their puppies or sitting on the couch talking.

“Glori is my last baby, so I cherish every minute with her,” mom Rachel Waters said. “She is beautiful externally, but more importantly, internally; Glori is my hug monster, and she is such a blessing to me.”

Although Cozart is only a sophomore, she is already set in her future. Cozart has her heart set on attending A&M in Galveston to become an aquatic vet.

“The first time that I ever went to the beach, I was in the sixth grade, and I didn’t know that I would fall in love with it like I did,” Cozart said. “When we went to go see the dolphins and pet stingrays, all I could think about was how good my day would be if I could spend all of it taking care of them.”