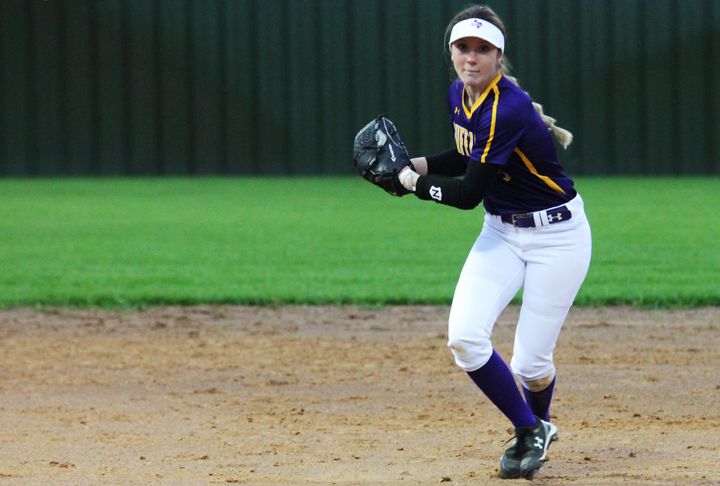 ▲
Senior Rylee Reeves warms up before a game.
menefee

▲
Senior Rylee Reeves warms up before a game.
menefee

Sun beaming down on her, palms sweating, senior Rylee Reeves takes a deep breath as she plays shortstop. Reeves has been raised on softball, starting with tee-ball at the age of four.

“Softball is my favorite sport because I’ve done it my whole life, so I love it,” Reeves said. “It feels like home to me; I get so much adrenaline during the game, and I also love playing with my teammates and how excited we get for each other.”

Aside from killing it on the field, Reeves also participates in Spanish Club, NHS, and volleyball.

“I don’t like to be a homebody,” Reeves said. “I like to be out doing things and being around other people; I love to have fun.”

Not only is Reeves active in school, but she also has her future mapped out. After graduation, Reeves plans to attend Sam Houston to become an English teacher and a softball coach. She hopes to walk-on at Sam Houston, as well.

“Rylee is a very collected person, and is very good with kids; with her strong passion of reading and softball, I think she’ll be an outstanding coach and teacher,” senior Andrea Daniel said. “Also, stupid things happen to her all the time so she has a lot of good stories.”

All of her activities have allowed her to make friends, even though she’s only attended Buffalo for a year. Sophomore Madison Walker describes Reeves as a very goofy person.

“Rylee’s personality really sets her apart from everyone else; she’s relaxed and energetic at the same time,” Walker said. “She’s such a goofy person, and I know I can count on her to make me laugh.”

As her senior year comes to a close, Reeves is a little sentimental about graduating and moving on from high school. Not only this, but she also hopes to leave her legacy.

“I’m sad about it being senior year; it’s my last year to play softball and to be around my Buffalo people,” Reeves said. “This year, I just want to leave my mark on Buffalo by being known as a hard-working student while also being an athlete.”