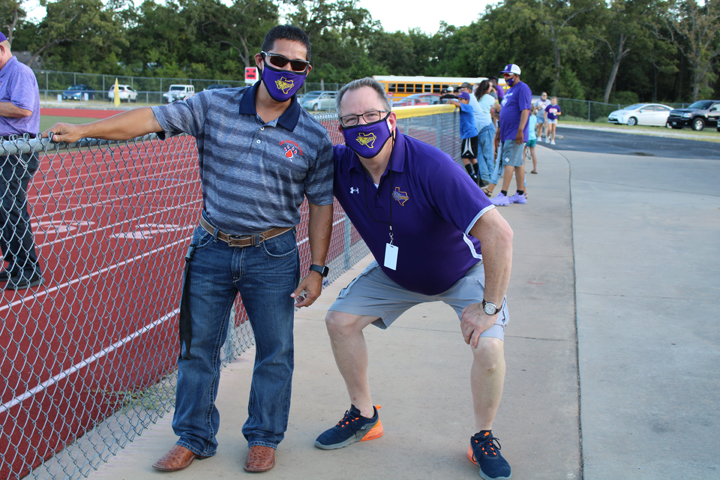 ▲
Principals John Clements and Lu Olvera goof around before a football game.

▲
Principals John Clements and Lu Olvera goof around before a football game.

With the community support and family-friendly atmosphere that Buffalo brings, new high school assistant principal Lu Olvera knew this was the place to be. In just a few weeks on the job, he has earned the respect of administration and staff alike.

“I think Mr. Olvera is fantastic. He’s great because he’s very attentive to student’s needs,” Principal John Clements said. “He kind of reads my mind when it comes to getting things done, and he just does it before I even bring it up.”

Buffalo’s small size doesn’t bother Olvera, who grew up in a small town, Bosqueville, near Waco. Olvera attended Baylor University and graduated with a bachelor’s degree in Kinesiology and a minor in Health.

Olvera first started coaching football at Cleveland High School for four years while being in charge of their ISS department. He later spent nine years at Madisonville coaching their football team and teaching special education. He took a one year break at China Springs High School doing the same thing and then returned back to Madisonville.

“It was good; I’m very adaptable to the circumstances I’m in as long as I was coaching football,” Olvera said. “I hope my time there makes things even better here in Buffalo. I want to learn and grow with the students and faculty.”

Olvera lives by the motto “Success is an opportunity to grow.” This is Olvera’s first stint as a member of administration, and he hopes to be successful in this new role after so many years as a coach. His motivation for this change was the opportunity to lead students as an assistant principal rather than being a coach.

“The goals to improve Buffalo are more on building onto the A rating accountability and to ensure a safe and learning environment,” Olvera said. “I expect teachers and students to be consistent and to support one another. And to be great.”

While there are obstacles to tackle with COVID-19, Olvera is doing everything he can to make sure in-person education is top priority.

“It’s interesting because every week is a new week,” Olvera said. “The hardest part is making sure procedures and policies are being followed and to make the school safe for everyone. There is not a lot of normalcy and as an administrator, we want to provide students and teachers an opportunity to have as many normal days as possible.”