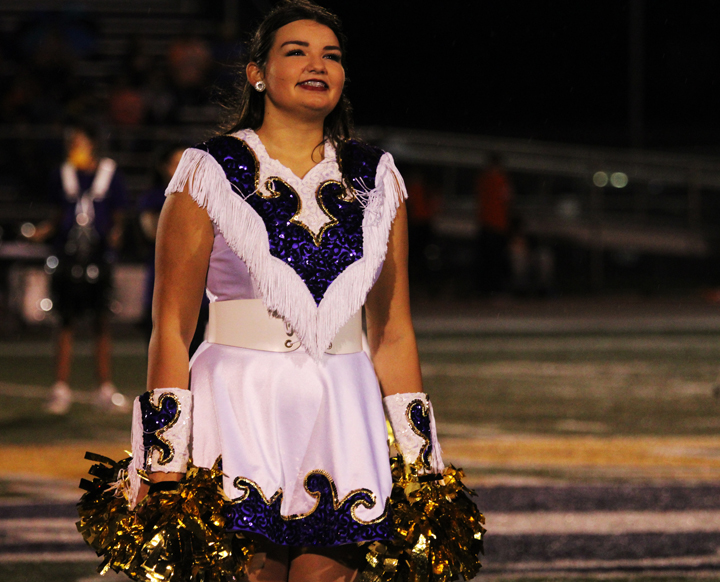 ▲
Junior Emma Adams gets ready to perform at halftime.

▲
Junior Emma Adams gets ready to perform at halftime.

Putting on a happy face is part of junior Emma Adams’s daily routine. Although she deals with several difficult situations, such as her father’s illness and her busy schedule, she never fails to take care of what’s most important: her friends and family. More importantly, she does it with a smile on her face.

The smile wasn’t always easy to keep on. Emma has never known a time when her dad hasn’t been sick: he’s survived two bouts with cancer, which has left him with some chronic health issues.

“Dealing with my dad and school has always been tough and I feel like I never have time for anything,” Adams said. “I try my best to make time for everyone because they are so special to me, but juggling school and everything else in my life is really tough sometimes.”

Tough times got a little tougher last school year when Emma’s mom, who works as an insurance adjuster, moved to Dallas for six months for work. On top of a busy school schedule, Adams found herself sometimes overwhelmed with everything she was responsible for. Whenever she felt the extra stress getting to her, though, she knew where to turn: dance.

Adams says dancing relieves her stress and brings her joy after a long day. Dancing has always played a part in Adams’ life, but it wasn’t until high school when she developed a passion for it. That passion came from a group that has become an integral part of who she is: a Bison Belle.

“I was nervous about trying out for Belles, but I was excited at the same time,” Adams said. “I hadn’t danced since a very young age, and I really wanted to do my best in order to be a part of such a special team.”

With her passion for dance also comes a desire for leadership. She hopes to win the role of captain of the Bison Belles next year and currently serves as an officer.

“The Belle constitution makes the expectations clear for the captain,” Bison Belle director Melissa Isaacs said, adding that Emma has the qualities that leaders need. “Emma is respectful, patient and good-humored; she’s not afraid of making a mistake.”

Adams doesn’t limit her plans to high school and is already plotting her path towards a successful future. She hopes to become a certified midwife and own her own ultrasound and birthing center.

“I want to pursue a career in the medical field because I basically grew up in a hospital room,” Adams said. “I feel like I’m giving back my generosity for all they’ve done for my dad.”

As for everything else in her life, things are a little easier now. Ironically, the COVID pandemic that has turned so many lives upside-down has meant that Adams’ mom is working from home, meaning fewer responsibilities. Instead of spending her extra time relaxing, though, Emma added a job at Brookshire Bros to her list of responsibilities. And as she continues to juggle all the various parts of her life, she has one piece of advice that she has learned to strive to live by: “Don’t cry. Not everything is a big deal.”

“I used to be an emotional wreck about everything,” Adams said. “I’ve just always been really sensitive, but I’m working to become a stronger person in the future.”