Outfit of the Week: Hannah Hickey 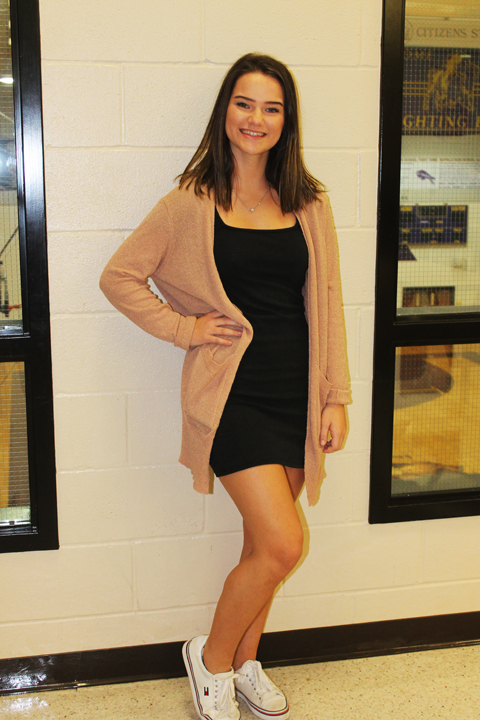 Senior Hannah Hickey wore an eye-catching outfit last week. Hickey wore a tank top black mini dress with a blush-pink wool cardigan. She paired her outfit with white Chuck Taylor All Star Low cut converse and a sterling silver necklace. Hickey also did her makeup light and natural and straightened her hair to complete her look.

“In the morning I spent a lot of time thinking of what I wanted to wear,” Hickey said “After a long indecisive 10 minutes, I decided to wear my dress with a cover up in order not to break dress code.”

Hickey’s outfit was picked for Outfit of the Week because it is an outfit that is currently trending among teens.

“I thought Hannah’s outfit was really cute and trendy,” senior Makenzie Houston said. “I would definitely wear something like it.”

Cardigans were popular in the 1950s and 1970s and gained popularity again in the late 2000s. Converse are shoes that have been a go-to shoes for casual dress wear.

“Converse and VANS are definitely a must-have,” Hickey said. “They go well with many clothes.”

Hickey’s light makeup look is also very popular for teens that go to school. It is considered a quick,easy and fresh makeup look.

“Like Hannah, I too like to wear natural makeup,” senior Andrea Daniel said. “Especially when I’m running late to school. It saves me a lot of time, unlike the more glamorous looks.”

The simplicity of the sterling necklace and straightened hair completed the look. Hickey wanted to keep things simple and school appropriate so the necklace and hair helped her achieve it.

“Even when she’s wearing a really nice outfit, she keeps her accessories simple,” senior Brent Steele said. “She always manages to look good.”

Hickey’s look was approximately $75 with the shoes being her highest expense. For her outfit she shopped at Forever 21, Macy’s, and H&M.

“I like to keep clothes on the low that is why I shop at affordable stores,” Hickey said. “The shoes were a bit expensive, but the rest was not. I was able to achieve a nice look while spending less.”