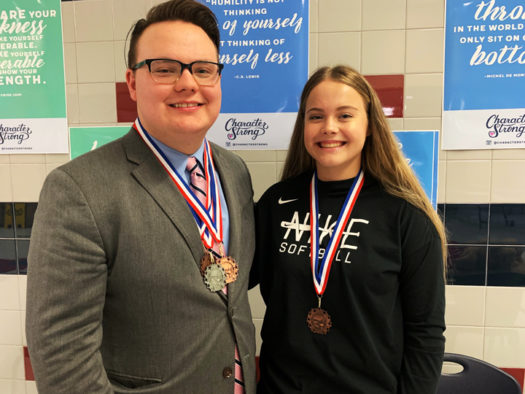 The truck carrying a giant propeller was stuck in the road, wedged up against a pole. Coach Melonie Menefee drummed her fingers nervously on the steering wheel as she looked to see if the suburban could make it on the side of the road to go around the blockage. Cars are stacking up behind the obstruction. The speech team is headed to Waco to compete, but they are running out of time.

Last Saturday, the speech team left a little later than they normally do around 6:30 to Waco. They brought only two competitors: senior Colby Menefee and sophomore Caylee Ayres since neither of their partners was able to make it.

“The drive to Waco wasn’t too bad since it was a little closer than usual, but we were actually almost late because we were stuck behind a gigantic propellor being moved,” Menefee said. “Luckily, I knew the person running the meet and was able to let him know, and things were running a little behind anyway, so we ended up getting there just in time.”

“I felt really good because I think I did really well, and I got a lot of TFA points which will help me to qualify for the TFA state meet,” Colby said. “I think if I just keep adding to or modifying my speech based on whatever type of commentary feedback I receive from judges it will hopefully help me to get better.”

Ayres competed in Poetry and place fifth. Prose and Poetry are performance events that run seven minutes, with the competitor essentially using their voice to act out the piece. Ayres also competed in Prose and in Domestic Extemp at the meet, but did not place.

“I really like to improve my public speaking skills and try to expand my vocabulary just to speak well and clear for the judges,” Ayres said. “I like competing in Poetry because it’s telling a story about personal experiences from people who write poetry and putting pieces of poetry together that really means something to me and then I act it out to the judges and try to make them feel the same way I do when I’m reading them.”

The meet was one of the last for the group for the first semester.

“We’ll travel to China Spring in mid-November for our last meet of the semester,” Menefee said. “We usually try to squeeze in a couple more, but with the musical and other events going on, there just isn’t time. We’re working hard at home, though, and I expect great things from these guys this year, even if this is a rebuilding year for us.”