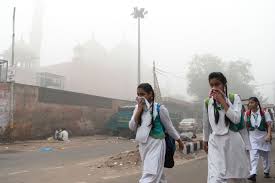 Air pollution in New Delhi, India’s capital, reached a fever pitch last week with 37 air quality monitoring stations in Delhi reporting “severe” smog. This comes immediately following Diwali, a major Hindu festival. The smog has remained so severe since then that some flights were canceled due to low visibility. Schools are shut down, and the government has created a policy in which during the day cars are only allowed on the road on alternate days, depending on whether their license plate number is even or odd.