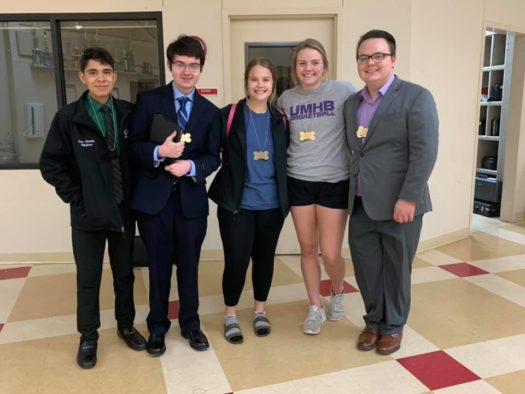 ▲
Speech and debate students show off their medals at the end of the Colmesneil meet.
menefee

▲
Speech and debate students show off their medals at the end of the Colmesneil meet.
menefee

An away game on Friday night made for a big lack of sleep for debaters headed to Colmesneil for a contest at 5:30 the next morning. It didn’t stop the team from coming home with hardware in hand, though.

The CX teaching tournament was to gain more experience early in the season; debaters were given advice on how to improve their cases. Seniors Colby Menefee and Mollie Dittmar debated as a team while sophomores Caylee Aires and Omar Almeida paired up. Junior Kyle Hurst also competed in interp events and worked with a speech coach on his pieces.

“This was our second meet and a teaching tournament means that most of the people there were there to learn and not to have heated arguments against each other,” Dittmar said. “It was a small tournament with only seven or eight schools there, I did learn a lot about how to make our case better.”

The CX debate topic this year has to do with armed sales to other countries, so as both teams enter the room to debate against each other, they know what their general topic is – just not the specifics.  Teams argue both affirmative and negative sides during each tournament.

“I felt like we did really well at the meet,” Menefee said. “We got to practice our new affirmative case; it our first time trying this new type of case on a different pace and it went really great.”

With two teams in CX, the odd one out was Hurst by being in an interp event. This is Hurst’s first year in Speech and Debate, so the judge’s advice on how to use his binder and showcase the emotions in his piece was useful to him.

“The tournament taught me a lot of what I had to better and improve which I needed,” Hurst said. “But I’m really glad I competed because I know what to do next time at another meet.”

According to everyone who went said that early morning was worth it; Hurst placed first in his interp events and in CX Debate, Ayres and Almeida placed fifth and Dittmar and Menefee placed first. Also, Menefee was named top speaker for the day with perfect speaks in each round.

“I was really excited about how they did; since Colby and Mollie had been doing this a little longer I did expect them to do better,” coach Melonie Menefee said. “Caylee and Omar are fairly new to CX debate, and the fact that they placed in this tournament shows that they are on the right track. Kyle is improving with every performance. It was a good day.”