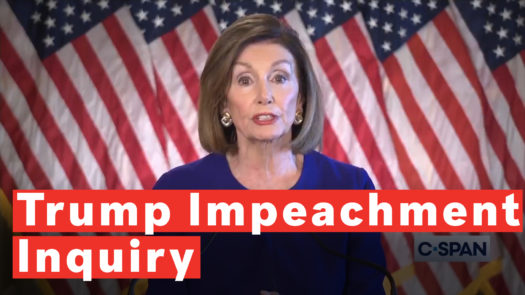 The impeachment inquiry comes following a whistleblower complaint alleging that Trump used aid to Ukraine as leverage to get political dirt on Joe Biden’s son from the Ukranian president, Volodymyr Zelensky. Biden’s son, Hunter Biden, was on the board of Burisma Holdings, a Ukranian energy company, between 2014 and this year.

The anonymous whistleblower has agreed to meet with congressional leaders. In the meantime, Trump has spent hours blowing up Twitter with accusations and threats, including a veiled suggestion that the whistleblower, who Trump referred to as a spy and a traitor, should be punished.

The Trump administration has admitted (via a rough transcript of a phone call between Trump and Zelensky released Wednesday) that Trump asked Zelensky to “do us a favor,” but Trump said that he’s done nothing wrong.

The impeachment inquiry also comes following intense political pressure on Pelosi from progressive congressional democrats. Pelosi has previously stated that she’d only pursue an impeachment inquiry with bipartisan support. Regardless of support, it is time for the impeachment process to get underway. We are past the point of danger from this president. Trump’s use of power for his own political gain, completely ignoring what is in the best interest of the public, is exactly what the Constitution’s framers had in mind as “high crimes and misdemeanors,” which is the standard for impeachment.

The chances of a successful impeachment are uncertain. It seems that Pelosi hasn’t met her original standard of bipartisan support, and so far no Republican lawmakers have publicly defected. But impeachment only requires a simple majority, meaning 218 votes. This means that, currently, impeachment is possible by a narrow margin.

But even if Trump isn’t actually impeached, the political implications of an impeachment inquiry are huge, and will likely have a huge impact on Trump’s reelection campaign. This is as it should be. Trump’s current presidency has been fraught with scandal and investigations. There simply is no way for a president to be effective as a world leader when there is a constant flow of doubt concerning his ability to lead. For this country to move forward, it is essential that this president and his executive overreach be out of the world spotlight and out of a position of power.