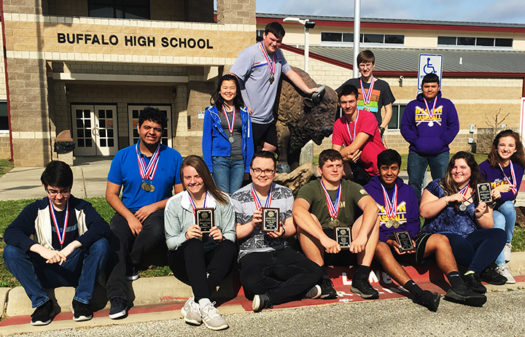 ▲
Academic UIL students show off their medals and plaques from the first contest day.
menefee

▲
Academic UIL students show off their medals and plaques from the first contest day.
menefee

The  high school  has earned the title of District Academic UIL Champions for the third year in a row. With multiple teams winning their contests, the overall score for BHS was almost 300 points higher than the second-place school.

¨This year we have the most students to qualify for regionals in a long time,¨ UIL coordinator Melonie Menefee said. ¨Many of the students have been working very hard in their events all year.¨

The Number Sense and Mathematics teams, which were made up of Senior Jose Sanchez, juniors Bailey Chase and Andrea Daniel, and sophomore Asa Henson, placed first and will compete at Regionals. Sanchez placed first in both events. He scored 196 points in number sense and 162 in mathematics.

¨I have been working hard on my events all year in preparation for UIL season,¨ Sanchez said. ¨My hard work paid off.¨

The current events team consisted of Colby Menefee, Mollie Dittmar and Nishit Taylor; they placed first, as well and will move on to regionals.

¨Being in speech and debate helped us stay updated on what is happening in the world,¨ Menefee said. ¨It strengthened our knowledge in the event.¨

¨This is my first time advancing to regionals in a journalism event,¨ Donaldson said. ¨I have been practicing on feature writing one day a week all year.¨

Rhodes, Menefee, and Josalyn Taylor advanced in Editorial Writing, while Donaldson and Menefee also advanced in Headline Writing. In addition, Menefee and Rhodes advanced in Copy Editing. These wins, along with a fourth-place from Wedhorn in Copy Editing, put the Journalism Team in first place.

¨I really like editorial writing,¨ Rhodes said. ¨It is different from the other writing events because it allows me to use my opinion.¨

¨I have been doing LD for several years now,¨ Taylor said. ¨To be able to finally advance in district is a huge accomplishment for me.¨

¨I started speech this semester and got into the groove of things quickly,¨ Almeida said. ¨It was my first time doing persuasive speaking, but Mrs. Menefee has taught me so much and it has paid off.¨

The Social Studies team placed first overall and is advancing to regionals; those students are Asa Henson, Logan Skelton, Jaxon Filip and Kaline Martinez. Asa Henson will also compete in Science at regionals. Nishit Tailor will compete in Computer Applications as well as substitute in as part of the Mathematics team. Junior Mollie Dittmar will compete at regionals in Ready Writing.

The students will advance to Regionals in the hope of getting to state in their event.

¨I really want to make it back to state in speech,¨ Cleveland said. ¨I had so much fun last year and made so many memories.¨