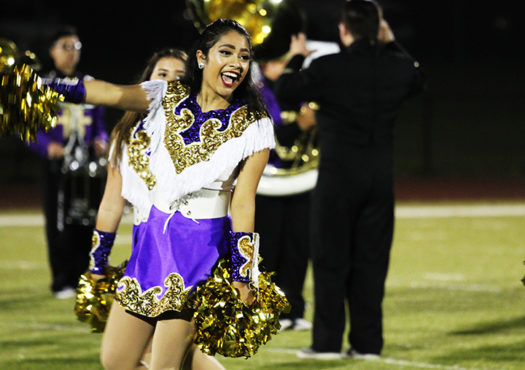 The door opens and three students roll in a tall display titled ¨FCCLA is Bigger in Buffalo.¨  A student, in particular, stands out. She is dressed in a red polo shirt with black slacks, curly hair and a face covered with highlights that sparkle like the sun.

Junior Sonia Martinez is passionate about two things: makeup and FCCLA. She has been in FCCLA for three years and competed in STAR events for two years.

¨I love FCCLA because of the competitions that are offered,¨ Martinez said. ¨For the past two years I have competed in Chapter in Review Display. This competition puts my creativity into action.¨

Martinez´s ability to do makeup has come in handy for FCCLA competitions. She has done students makeup for a competition.

¨When it’s competition day, Sonia does my makeup,¨ senior LaSundra Robinson said. ¨I want to look nice and presentable for the judges.¨

Although Sonia is unsure of where she wants to attend college, she knows she wants to pursue her career as a cosmetologist. Her inspiration to pursue this career comes from her aunt.

¨I hope to become a cosmetologist just like my aunt,” Martinez said. ¨I have been to her shop a few times and worked with her.¨

Besides being a makeup guru, Martinez is described by her best friend as funny, outgoing, and smart. Senior Jenifer Dominguez and Sonia have known each other for five years. They share many interests which have helped them maintain a close friendship.

¨Like Sonia, I also have a passion for makeup and FCCLA. We both compete in the same event and share makeup techniques,¨ Dominguez said. ¨She is such a great friend and I don’t know what I would do without her.¨