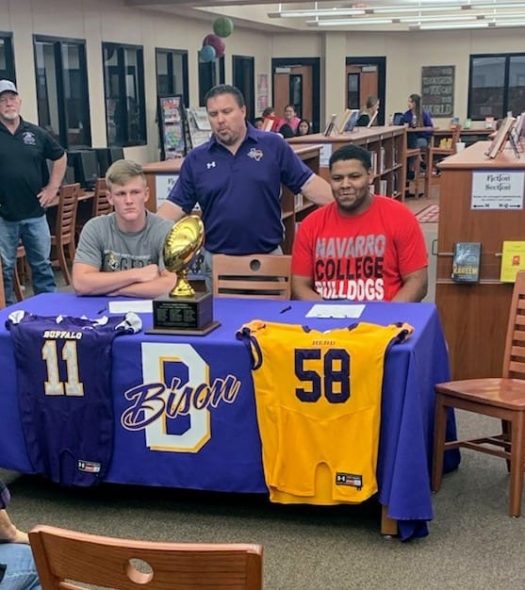 “I was very impressed and proud to see a number of my guy friends sign to play college sports,” senior Brenda Garcia said. “From a young age, I knew our senior class had a handful of great athletes.”

“At the beginning of our football season I was told ETBU was scouting me; I was so excited for them to see me play,” Thompson said. “I was so honored that they ended up wanting me to play for them and had no doubts about signing to play there.”

Senior Jesus Garcia signed to play football for the Navarro Bulldogs at the Corsicana campus. Garcia will play as a defensive player there.

“I enjoyed watching him play high school football these past few years; it is very easy to tell that he is a star player especially when it comes to playing defense,” junior Taylor Beshears said. “Everyone was so proud to watch him sign into playing football to the next level.”

Baseball players were not to be left out of the hunt for college sports careers. Marshal Jonas will play shortstop at Western Texas.

“I have played baseball almost my entire life, and always knew I wanted to play college ball,” Jonas said. “I am so excited to travel nearly five hours to Snyder, Texas and play for Western Texas College.”

Jake Henigan signed this week to play pitcher at Richland College in Dallas.