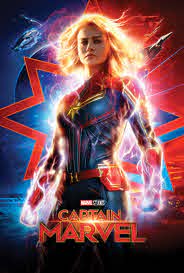 Captain Marvel (2019) feels an awful lot like any Marvel movie. It’s another origin story for another superhero. That said, it does have some things going for it. Especially for diehard superhero fans. The film is impressive in that it makes this origin story interesting by upending the typical story structure and throwing viewers into the action. Only after the viewer is immersed into the powers of the title heroine is her story of becoming an intergalactic warrior revealed. Captain Marvel serves its purpose both as a final cornerstone in the saga but also as inspiration gained from discovering a female superhero on screen.

Captain Marvel is an extraterrestrial Kree warrior who discovers herself trapped in an intergalactic battle between the Krees and the Skrulls. Living on Earth in 1995, she has repetitive memories of life as U.S. Air Force pilot Carol Danvers. With help from Nick Fury, Captain Marvel attempts to uncover the mystery of her past while harnessing her special superpowers to end the war with the Skrulls. It’s far from being the best Marvel Comics Universe film, but it does a decent job on introducing on of the most powerful characters of that universe.