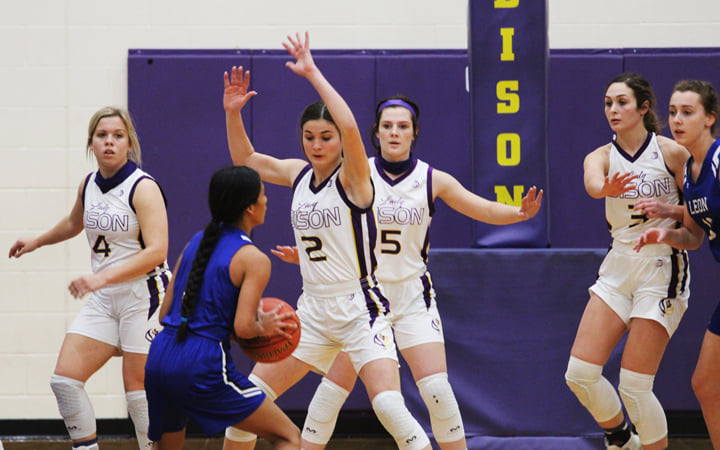 ▲
Josie Henson blocks the ball handler while her teammates back her up.
menefee

▲
Josie Henson blocks the ball handler while her teammates back her up.
menefee

The Lady Bison basketball team opened up their official preseason season against the Mexia Lady Cats. The girls began to practice on October 21 and scrimmaged November 2 against Leon and Centerville before opening preseason play. The team has been practicing both mornings and afternoons to prepare.

“This year we have athletics first period and so we get to practice first thing in the morning and again at the end of the school day,” junior Avery Hardin said. “We don’t like the early morning practices much, but we do like how we have a bit more time to improve ourselves individually and as a team.”

The basketball team is under the leadership of new head coach Eric Boettcher, who is also the girls’ athletic coordinator. He worked with the girls during summer workouts and was excited to begin the season.

“During summer I saw how some of the girls played and it made me so excited to start the season,” Boettcher said. “Now that it is here I finally get to do everything I’ve been planning for us to do. I love how the girls are as a team.”

The Lady Bison have also faced Scurry-Rosser and Hill Country Christian at home, falling short to Scurry- Rosser and pulling through with a win against Hill Country.

“The two games we played this past week were kind of warm-up games for us,” freshman Elizabeth Daniel said. “We played the best we could against those teams. They had more height advantage, but we fought back in both games.”

The girls set themselves a few goals for this season: they want to work better as a team and fill the big spots that graduating seniors left.

“This year since we lost such a big part of our team we want to fill those shoes as much as we can,” senior Josie Henson said. “We want to be the team that nobody expects to be, work hard every day, make it into playoffs, and have fun each and every game. We don’t want to lose focus on the big idea which is having fun.”

The Lady Bison will take on the Centerville Tigers on Tuesday, November 17 at home. They will also take on Life Waxahachie over Thanksgiving break on Monday, November 23 in Waxahachie.