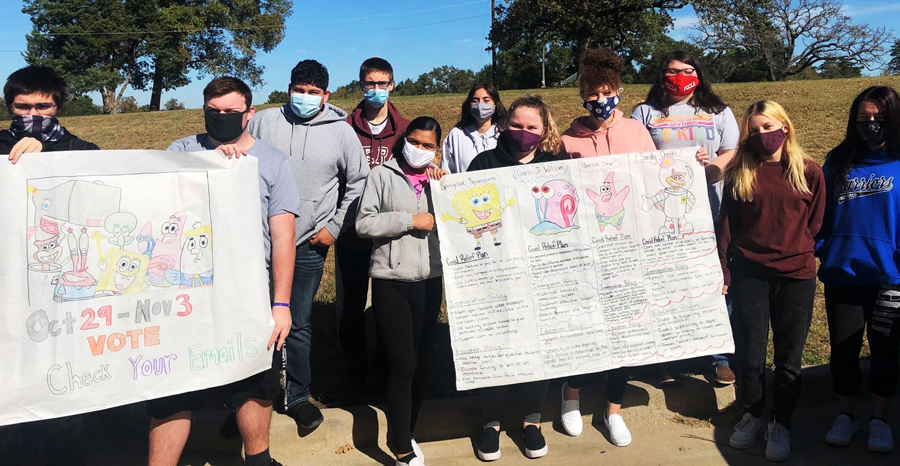 ▲
FCCLA students show off the mock election posters they used for the project.

▲
FCCLA students show off the mock election posters they used for the project.

Since most high school students are not eligible to vote in the presidential election, juniors Hannah Travis, Aryonna Coleman and Marie Herbert, with the help of FCCLA adviser Melissa Isaacs, created a mock election which provided students with the opportunity to vote on the issues facing Americans without identifying them with specific candidates or political parties.

“We were having a class discussion about world problems because we have a lot of them,” Travis said.

“Miss Isaacs mentioned how cool it would be if we held a mock election in school, just to see other student’s opinions.”

The girls didn’t want to base the voting on the actual candidates, however. They wanted to see where students stood on the issues. So, each candidate was assigned a SpongeBob character in order for students to give an unbiased vote. SpongeBob represented Howie Hawkins. Gary was Joe Biden. Patrick was Jo Jorgensen and Sandy was Donald Trump. Each cartoon character was matched with a list of policies and other characteristics of each candidate.

“Most kids these days just go along with what their parents tell them too, but to have the identities of the candidates hidden let teens decide for themselves,” Travis said. “It really is going to show them how much they don’t know.”

After picking a character for each person, the team created a google form and sent it out to the study body. At the end of the election process, Green Party candidate Howie Hawkins won the mock election with 36.6% of the vote.

“We were surprised because we thought that Donald Trump would win,” Travis said. “Most student’s parents make a living off of oil and trade work, which Biden wants to get rid of, so all the students hear is that Trump needs to win.”

Travis, Coleman and Herbert then created another form which let students vote on the actual Presidential candidates on Election Day, November 3. One problem they faced was election fraud where students were voting more than once. They had to take those ballots out to see who actually won.

“I already knew Trump was going to win because that’s all who students talk about in school,” Coleman said. “I just didn’t know one student would vote over a dozen times for him.”