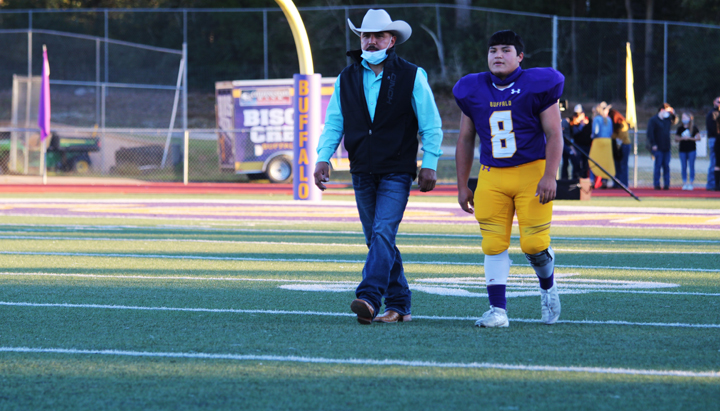 ▲
Senior Benito Avila and his father head to the 50-yard line during Senior Walk.

▲
Senior Benito Avila and his father head to the 50-yard line during Senior Walk.

Seniors might have had their traditional final pep rally canceled due to COVID-19 restrictions, but they were not about to give it up altogether. They celebrated their senior “pep rally” with a game of musical chairs to replace the usual group dance, and held it by themselves after the social-distanced pep rally earlier in the afternoon. With only a few minutes to spend together, the seniors made the best of it anyway.

“I wanted to give the seniors their last pep rally, but of course it’s hard with these regulations that we have,” Principal John Clements said. “I didn’t like having to give them just a few minutes together, but we wanted to keep them safe as well. They seem to have enjoyed the time they spent with each other, which made me feel really great about those kiddos.”

After the pep rally, awards were announced and the seniors headed to the gym to have their time as a class. The class officers had to find a contactless game for the seniors to enjoy, so they chose musical chairs. They had 12 minutes total to be around each other to prevent any complications of being together for 15 minutes. Although it was a short time, the students made the best with what they got.

“When we met with Mr. Clements he specifically told us to find a game that didn’t have much contact, and musical chairs was the first thing that came to mind,” class president Asa Henson said. “We enjoyed having the gym to ourselves and just getting to play a game with our class. It was the new normal for us, which sucks, but it was good to have the time together.”

Senior Walk was held as usual that evening before the football game, giving the seniors a chance to have a “normal” event for their year.

“I’ve always looked at the previous senior walks and I couldn’t wait until I walked, but now that it was my turn, I didn’t know how to feel,” senior Katy Webb said. “It came too fast, but I was also ready to feel that accomplishment of being recognized. I’m glad we didn’t have to cancel.”