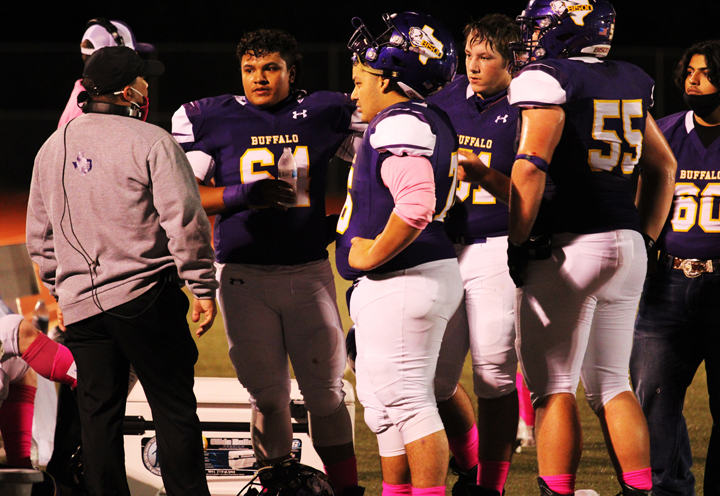 ▲
The Bison get directions from the coaches on the sidelines between plays.

▲
The Bison get directions from the coaches on the sidelines between plays.

The Buffalo Bison (7-0) celebrated their Homecoming in last week’s football game against the Clifton Cubs (3-5). It was a chilly night for the players and the homecoming candidates but it was easy to ignore in the excitement of the game.

After winning the coin toss, the Bison were prepared to work hard for another victory. Only a few minutes into the game, senior Eric Beshears scored a 56-yard touchdown, but the Cubs were also able to score and led the first quarter. The Bison didn’t let them get it down.

“I wasn’t too worried about the first quarter,” Beshears said. “It’s not how you start a game; it’s how you finish it.”

At the start of the second quarter, senior Brett Hoffman turned the game around with two touchdowns. Last week, Hoffman was named Football Player of the Week

During Halftime, senior Denim Parker and Josie Henson were named Homecoming King and Queen. After their celebratory ride around the field, the Bison Belles danced to a military routine, followed by a performance from the Bison Brigade.

“Being announced Homecoming Queen was honestly a dream come true,” Henson said. “I’m very grateful for everyone who voted for me.”

The third quarter was not uneventful for the Cubs, but the Bison were successful in scoring two touchdowns by senior Jordan Rogers. This increased the Bison lead to 17 points.

“The crowd was excited, which made us excited,” Rogers said. “It was a really good game because we were focused and we worked together.”

Beshears ended the game with a touchdown, which made the final score 41-23. With strong offense from Hoffman, Beshears and Rogers also came strong defense from juniors Ethan Williams, Catch Thompson and Reese Boyd. The Bison travel to Franklin next Friday.

“Whether we win or lose, it’s going to be a good game,” Hoffman said. “I think we got some tough competition, but I believe we can push through them.”