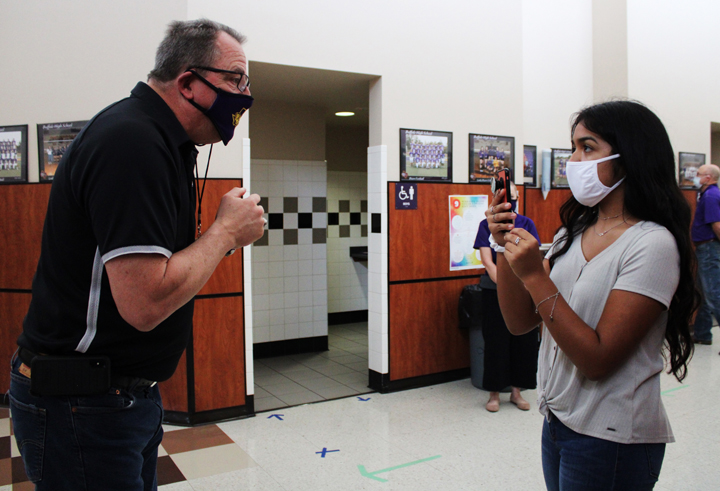 With the ingredients out in front of her and the timer counting down, she doesn’t know if the dessert will be up to her standards. “Don’t judge” runs continuously through her head while she waits for the timer to go off. Junior Sherlynn Rodriguez is attempting to bake a well-known Mexican dessert, flan, and she wants it to be perfect.

“It was the hardest dessert I’ve ever done because every ingredient had to be precise, and I knew I couldn’t make any mistakes,” Rodriguez said. “The dessert came out decent, but I will definitely be trying again until it comes out perfect.”

Rodriguez says her favorite way of expressing herself is through baking. When she is not actually in the process of mixing and putting desserts into the oven, she spends her time watching baking videos. She shares her interest with several of her friends: juniors Emma Adams, April Martinez, Jazlynn Early and Saloni Jariwala.

“I love baking with Sherlynn because it’s fun and she knows what she’s doing,” Early said. “I always tell her she needs to have her own bakery. She’s comfortable to be around and she makes me feel like a chef.”

Rodriguez has other outlets to express her creativity as well and stays busy with extracurricular activities. She plays basketball and participates in FCCLA, journalism and NHS. She says these activities have all helped her out with multi-tasking and public speaking.

“I think it’s important to learn about public speaking because it is necessary to get a job and not be shy,” Rodriguez said. “My activities have also helped me with being organized and taking it day by day.”

Encouraged by her parents, Rodriguez wants to pursue a career in the medical field. She is determined to go to college; her focus is mainly on Texas A&M. She wants to attend medical school to become an optometrist or a pediatrician.

“I think she is very smart and I know she will be successful in her future,” Jariwala said. “We are both planning to go to the same university and follow the same path, which is good because we’ll have each other to rely on.”

When she dreams, though, Rodriguez knows she wants to travel to Europe and Hawaii as well as continue her interest in baking.

“I want to see other parts of the world and the beauty of other cultures,” Rodriguez said. “I want to experience the beautiful architecture in Europe and the natural beauty of the islands. And while I travel, I can learn about desserts from all over the world.”