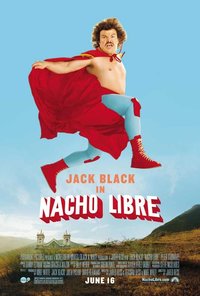 There is no exaggeration when I say Nacho Libre is a cinematic masterpiece. This underrated classic is guaranteed to make anyone laugh uncontrollably throughout the entire hour and thirty-two-minute film. The movie was given a 40 percent approval rating on Rotten Tomatoes; however, many critics failed to appreciate the effort that made it so special.

Ignacio (Jack Black) is a cook at a Mexican monastery. He cares deeply for the orphans he feeds, but he knows the food is terrible. He wants to make money to buy better food for the kids, and, hopefully, impress Sister Encarnacion (Ana de la Reguera). When he discovers he has a natural talent for wrestling, he becomes Nacho Libre, a masked wrestler who wrestles for cash. His training partner Esqueleto (Hector Jimenez) inflicts bodily harm during training sessions, which is no fun, but there is a bigger problem: wrestling is forbidden by the church elders at the monastery. Soon he finds himself leading a double life, concealing his true identity while he wrestles. But it isn’t all bad. For the first time in his life, he feels like he fits in and has something to fight for.

Jack Black is one of the best comedic actors of our generation and Nacho Libre helped propel him to that spot. He manages to portray so much character and development in a single movie. Not to mention the writing in this film is the epitome of comedy. It’s a mixture of awkward funniness and stupidity, which makes it iconic.

Besides the white actor playing a Mexican, the movie is authentic to the culture. There are a small number of movies that illustrate the true origin of a film, however, the scenery and people in Nacho Libre are realistic to present-day Mexico. Cinematography is something that you wouldn’t expect from a comedy, let alone a Nickelodeon film, but the camera is able to capture moments that provide detail to the story.

Overall, this is one of my favorite movies of all time. I’m able to rewatch this film a dozen more times and I still can’t help but laugh. Nacho Libre should be given more appreciation and maybe even a belated Oscar.