Checking out the Oldies: Mean Girls 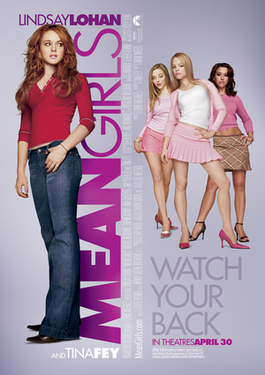 While many movies today miss the mark in portraying high school life, Mean Girls, released in 2004, comes pretty close to hitting the target. The movie focuses on a new girl from Africa, Cady Heron, who is introduced to the school and is instantly welcomed to the “plastics.” The plastics, the most popular girls in school, transform Cady into one of them, stirring up trouble.

Regina George, the head plastic of them all, has a sassy and supreme attitude. Gretchen Wieners is a huge gossiper who values herself more than anyone else. Karen Smith is pretty but isn’t blessed with brains. All three are relatable to teens today.

And this is what makes this movie such a hit. Sure, it’s full of clichés, and the plot isn’t all that original, but there’s a lot that’s fresh and sharp in this movie. Without a doubt it is entertaining and thought-provoking for teens. For anybody who is currently trying to endure the perilous world of high school, there is a definite appeal. For those who have already survived it, there are plenty of chuckles to be had. This movie might be as old as some of the high schoolers watching it these days, but it has moved into cult-classic territory and is timeless in its storytelling.