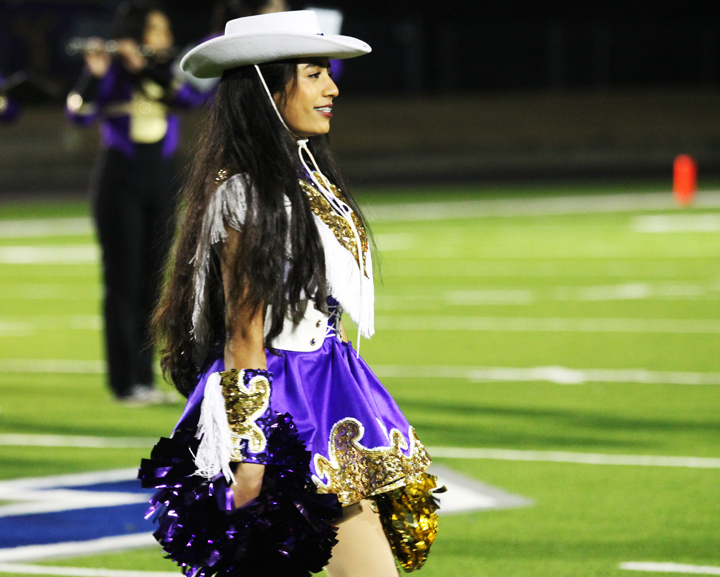 ▲
Pari Jariwala flashes a smile at the audience during a halftime performance.
menefee

▲
Pari Jariwala flashes a smile at the audience during a halftime performance.
menefee

Friday night lights can be a handful for freshman Pari Jariwala, but her passion for both marching band and drill team is what motivates her to make it through the night, moving straight from her dance routine with the Bison Belles to playing with the Brigade.

“Performing during football games is rewarding enough,” Jariwala said. “I’m nervous that I’ll mess up in front of everyone, but the adrenaline keeps me going.”

Aside from performing double-duty during halftime, Jariwala is also involved in Student Council, FCCLA and is a class officer.

“I like being involved because it gives me something to do,” Jariwala said. “It’s stressful but overall fun.”

Being a part of numerous organizations has given Jariwala the opportunity to branch at and make new friends. When meeting new people, Jariwala is described as chill.

“She is one of the sweetest and reliable people I’ve ever met,” freshmen Shelby Johnston said. “I’m glad that I can trust her because she’s always been loyal to me.”

Jariwala is one of the newest line members of the Bison Belles, but she would like to change her status as a lieutenant, and eventually, captain.

Jariwala has a few years until graduation, but her future is already laid out. She plans on attending TAMU to become a pharmacist.

“It’s a stable job, and it would really benefit me later on in life,” Jariwala said. “I just hope to become successful in the future.”