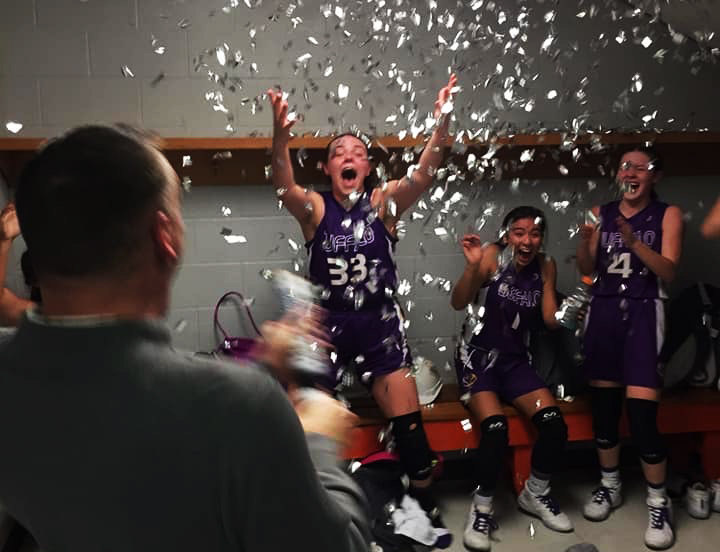 ▲
The team celebrates after it's win over Teague.
contributed photo

▲
The team celebrates after it's win over Teague.
contributed photo

As the scheduled season games zipped by this season, the Lady Bison have tackled each game with the bigger goal of earning the title of district champs. The team traveled to Teague last week to claim that title and came out victorious.

“It was one tough fight, I’ll tell you that,” senior Mollie Dittmar said. “We knew it was going to be a tough one but we were tougher than Tague and we were determined to keep our title.”

The girls will have their final home game on Feb.11 against Groesbeck. They have already beat Groesbeck at their place, and since the girls are undefeated if they win Tuesday night they will be undefeated district champs for the second year in a row.

“Oh, we are practicing hard and studying Groesbeck hard because we want this undefeated title of champs more than anyone,” senior Maddie Bates said. “We are prepared to fight and do what we do in order to accomplish our goal.”

The team has already clinched their playoff spot and will play either Troy or Rogers, possibly in Waco either Monday the 17 or Tuesday the 18.

“We have already started to scout both teams and have been practicing for both teams,” senior Mackenzie Houston said. “We have already played Troy and beat them, but we haven’t seen Rogers much; either way, we are ready to come out and fight and defend.”

The varsity boys also played Teague and came out with the win as well. It started out rough, but they came out and finished.

“We were making tons of mistakes but then once we got on our wheels we couldn’t be stopped,” sophomore Ethan Williams said. “We fought our way through these district games and hopefully we can clinch a spot for playoffs.”

The team’s chance of playoffs isn’t guaranteed, but they are fighting for the record they need to make it happen.

Both the JV teams for the boys and girls played Teague as well. The girls JV came short as the boys pushed through to gain a win.

“I’m glad we clutched that win against Teague,” sophomore Cameron Golden said. “We fought for it and deserved to win.”