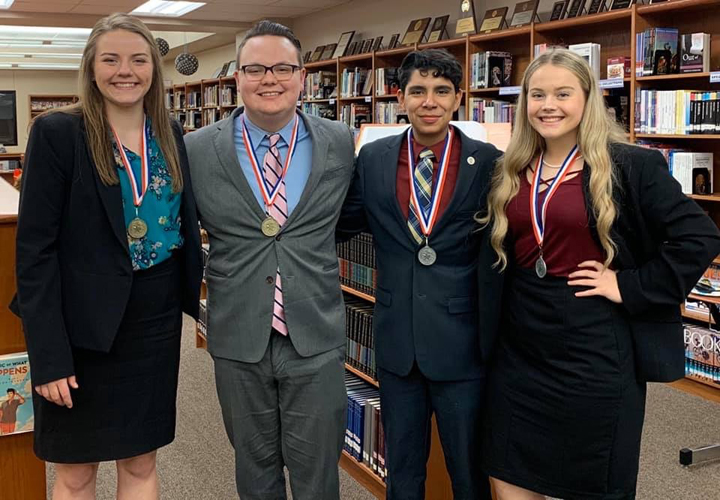 Hard work and dedication definitely paid off for the Speech and Debate team at the UIL CX Debate competition on Wednesday. All four teams placed, with two teams advancing to state.

“It’s awesome to be finishing my debating days on a strong note,” senior Mollie Dittmar said. “The morning of the debate, I was honestly more nervous than I thought I would be, but I’m really glad that Colby and I got to advance to state our senior year.”

Dittmar and senior Colby Menefee won first, with sophomores Caylee Ayres and Omar Almeida earning second. Both teams will be competing in the UIL State competition in Austin in March.

“Debating felt good and it was really exciting,” Menefee said. “It’s my senior year, so it’s my last time to make it to state in CX, so it was really nice to win.”

Sophomores Eddie Aguilar and Anthony Gonzales stepped in at the last minute to fill a needed spot and ended up winning seventh place. Freshmen Gavin Pruitt and Lane Freeman walked away with fifth place medals.

“Competing made me feel nervous but accomplished at the end,” Pruitt said. “Mrs. Menefee makes debating enjoyable, and I hope to place higher in district next year.”

Students have been practicing since September, competing in practice tournaments on weekends and practicing daily in class. A few weeks ago, the class shifted their focus solely to CX in order to prepare for the competition.

“Yesterday was probably the toughest day of debating they’ve had this year,” speech coach Melonie Menefee said. “The Elkhart teams have improved over the last couple of years, so they definitely had to work to get where they were.”

The top two teams debated in four rounds at the competition, and they would’ve had a fifth around against one another. However, they decided the time was better spent listening to a judge critique of their rounds so they can improve in their debating skills before the state meet.

“I feel we all did really well; I’m really proud of Lane, Gavin, Anthony, and Eddie for doing so well their first year,” Ayres said. “I’m really excited about state, even though I know it’s going to be difficult.”