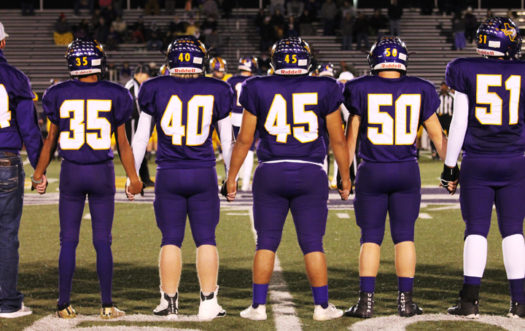 ▲
The Bison wait and watch during the coin toss to see who will receive.
menefee

▲
The Bison wait and watch during the coin toss to see who will receive.
menefee

The Buffalo Bison (7-2) defeated the Edgewood Bulldogs (6-3) in the battle for second in District last week. The Bison will travel to Scurry-Roster on Friday for their next matchup.

“It was important that we won that game because we couldn’t risk losing any more this season,” senior Dustin Morgan said. “It was also the seniors’ last time playing on the home field, and that’s something special.”

To start off the game, the Bulldogs kicked off the Bison. It wasn’t until the end of the quarter when touchdowns being were scored. Senior James Phillips made his way to the endzone, but the Bulldogs also managed to add points on the scoreboard.

“We started the game with a good mindset,” Phillips said. “We were positive that we were going to score plenty of touchdown throughout the night.”

The Bulldogs were unsuccessful at scoring in the second quarter. However, both Phillips and senior Jamual Randle made touchdowns but failed at making any two-point conversion.

“Jamual was definitely one of the best players on the field that night,” junior Bocho Villagomez said. “He deserved being selected to be player of the week.”

The third quarter only consisted of the Bulldogs with another touchdown. The defensive side of the ball included sophomore Catch Thompson, senior John Vaughn, and junior Asa Henson with plenty of assists and several tackles.

“Our goal is to stop the other team from scoring,” Vaughn said. “We were successful at doing that, most of the time.”

Junior Eric Beshears made two touchdowns, followed by a field goal by junior Francisco Saldana, in the fourth quarter. Although the game ended with a touchdown by the Bulldogs, the Bison still won with a final score of 33-20.

“Winning this game meant we’ll be able to go to playoffs,” Beshears said. “We got to stay focused so that we can go far.”