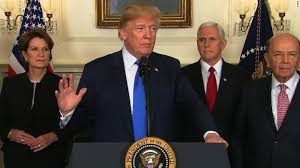 President Donald Trump announced Friday that he would not consider a complete removal of tariffs on China as part of ongoing trade negotiations. A new set of US tariffs on China is set to take effect in December. This comes despite increased promises from China regarding its use of US intellectual property.

“They’d like to have a rollback — I have not agreed to anything,” Trump said. ”China would like to get somewhat of a rollback, not a complete rollback, because they know I won’t do it.”