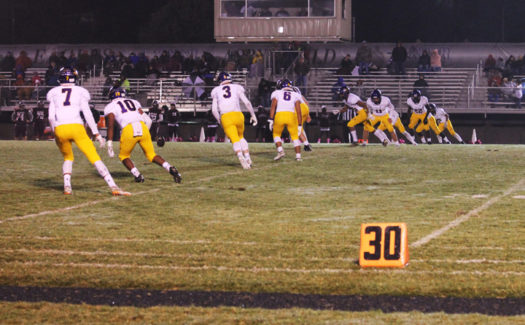 ▲
The Bison kick-off team kicks off to Mildred after scoring a touchdown.
menefee

▲
The Bison kick-off team kicks off to Mildred after scoring a touchdown.
menefee

Last Friday’s football game started off cold and windy. The lights might have powered off right before the kick-off, but Buffalo fans anticipation and hope were still on. Once again, the Mighty Bison (6-2) have come out on top against the Mildred Eagles (4-4). Next week’s matchup is against the Edgewood Bulldogs on Nov. 1.

“It was really cold, but the game was really fun and exciting to watch,” sophomore Saloni Jariwala. “I also was looking forward to drinking hot chocolate during halftime.”

Buffalo kicked off the game on a great start. Junior Brett Hoffman passed the ball over to senior Jamal Randle and makes a touchdown, but the Bison didn’t stop there. A two-point conversion run by Hoffman led to a score of 8-0.

“We made a lot of good plays during the first quarter,” Hoffman said. “We played the rest of the game really well, too.”

The second quarter consists of several touchdowns from both teams. Junior Eric Beshears and James Phillips both scored and Randle with two touchdowns. The Bulldogs only managed to make one touchdown and a two-point conversion.

“The touchdowns kept going back and forth between teams,” Beshears said. “We stopped them from scoring at the end of the quarter.”

During halftime, no one stepped onto the muddy field. The Bison Brigade played from the stands and the Bison Belles performed on the sidelines.

“Last Friday’s halftime performance was no exception for the year-long tradition of the Bison Belles,” Belle captain Kayla Saenz said. “We were freezing, but it was still exciting to dance in front of the crowd.”

“We made plenty of touchdown throughout the quarter,” Randle said. “We failed at those last conversions though; it’s just something we have to work on.”

The Bulldogs made a touchdown at the beginning of the fourth quarter. The Bison also scored along with an interception return by senior Brent Steele. The Mighty Bison led the night with a score of 71-30.

“Although there were many interruptions at the beginning, we still played a great game,” junior Benito Avila said. “It’s not really how you start, but how you finish the game.”