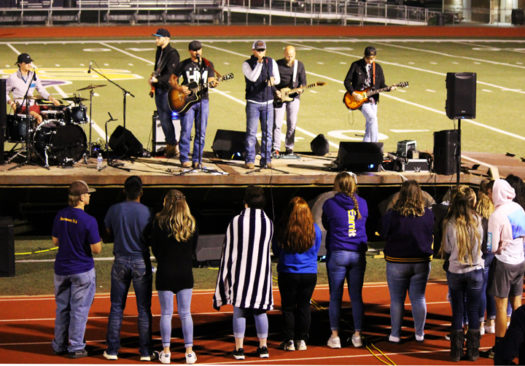 ▲
Students listen to the singing at Fields of Faith.
bates

▲
Students listen to the singing at Fields of Faith.
bates

“There’s a little more to it than church on a Sunday/ Nobody is buying their ticket to heaven when they pass the plate.”

The crowd sang along to “Man on Monday,” one of the Band Reeves’ original songs, at Fields of Faith.

“I thought Fields of Faith was awesome, but my favorite part was probably singing and listening to the speakers,” senior Mollie Dittmar said. “It was really neat to see how into it the singers were.”

Fields of Faith is a church service that took place at the Buffalo High School football field on October 23. It gave the community an opportunity to gather together to worship, pray, sing, and hear from guest speakers.

“I thought Fields of Faith was pretty good,” senior Maddie Bates said. “I just think it didn’t get talked about enough, but over the years, if Buffalo continues to do it, I think it’ll grow more and more.”

“I felt very nervous yet excited about holding Fields of Faith because Buffalo has never done one before,” Reeves said. “I thought if we got the right speakers and band, people would be really moved and love it and it would become an annual event.”

After opening prayer and singing, guest speakers Alyssa Carr, Erica Reeves, and Pastor Alan Grisham gave their testimonies and talked about their walk with God. Since the speakers were of different ages, they were able to share their individual experiences and spread their own messages.

“When I found out the students were organizing Fields of Faith, I was excited, and I was glad to see the students taking a lead in organizing things,” Grisham said. “The youth is where our future is, and my hope is that they will find some of the solutions to the problems that my generation has not been able to fix.”

Reeves decided to organize Fields of Faith because she wanted to reach out to the students and the community. She said her inspiration “came from the students” and she wanted to “express her faith” and share it with as many people as she could.

“I’m with the students every day and I can’t always speak to all of them and share a similar experience with something they may be dealing with daily,” Reeves said. “That’s why I thought bringing speakers with different experiences and testimonies could really reach some of these students.