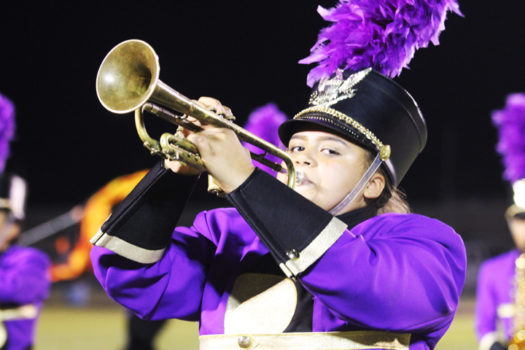 Band director Jeff Villarreal pumped up his band before they hit the field. “Alright, band, this is your time to shine, and no matter what, I am very proud of how far we have come. Go out there and bring out The Dark Side of Rach.”

It was time for the band to march onto the field for Regional UIL competition. Months of preparation had come down to this point.

“We have worked and worked since July,” Villarreal said. “They were definitely prepared for this, and from the way they practiced and how they talked about how they felt, they were confident.”

The band competed against schools in the Waco area.

“There were bands with so many kids and they sounded so good,” junior Maria Dominguez said. “But Mr. V told us it is not the size of the band, it’s the power and fundamentals of the band. When he said that, it made all of us look at it differently.”

The band scored straight 2’s, giving them an overall score of 2. Although they fell short of going to Area, they improved their scores from previous years.

“Although we didn’t make it to Area, I feel like we improved so much, and we did really well,” freshman Christian Martinez said. “It didn’t come out like we wanted it to, but I am still very proud of how we did and all the time and effort we put in.”