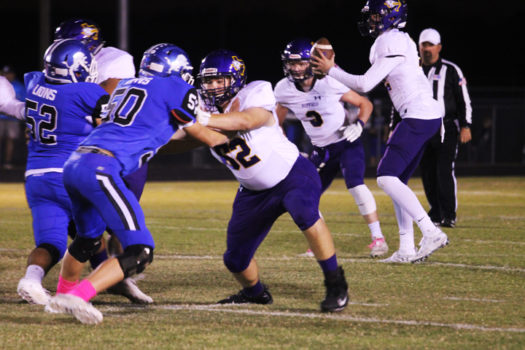 ▲
Freshman Lane Freeman blocks during an offensive play for the Bison.
menefee

▲
Freshman Lane Freeman blocks during an offensive play for the Bison.
menefee

Friday night’s intense football game resulted in another celebratory win for the Buffalo Bison (5-2) against the host Blooming Grove Lions (3-4). The Bison will travel to Mildred on October 25th for their next game.

“We all felt super confident when we stepped on that field,” junior Benito Avila “I hope we get that same feeling when we play at Mildred.”

The game began with Buffalo kicking the ball to Blooming Grove. Later in the quarter, junior Brett Hoffman scored with a rushing touchdown, followed by a PAT by junior Fransico Saldana. Blooming Grove had managed to score, but the Mighty Bison ended the quarter on a high note with another touchdown along with a two-point conversion by Hoffman.

“We started the game really good,” Hoffman said. “It made us have high standards for the rest of the game.”

The second quarter consisted of a touchdown by senior James Phillips and a failed attempt at another conversion. With only a minute left in the quarter, Blooming Grove made a touchdown but was unsuccessful at making their field goal.

“We could have got that conversion if we were more focused,” senior Brent Steele “It’s just going to take more practice.”

To start off the third quarter, Blooming Grove kicked off to Buffalo. Hoffman scores and Saldana makes the field goal. The rest of the quarter was eventful until another touchdown was scored by the Bison and Saldana with the extra point.

“It’s a lot of pressure for me to score each field goal,” Saldana said. “It’s important because it means more points for the team.”

To end the game, Phillips made his way towards another touchdown, adding more points to the scoreboard. Soon after, the Bison intercepted a Blooming Grove pass and resulted in another touchdown.

“We stopped Blooming Grove from scoring any other touchdowns,” Phillips said. “It was a good way to end the game.”

After the game, both teams met in the middle of the field and took a knee for a prayer. The Buffalo Bison returned home with another win and a final score of 49-13.

“Last week’s game was very exciting,” senior Dustin Morgan. “I feel that our next game is going to be even better”