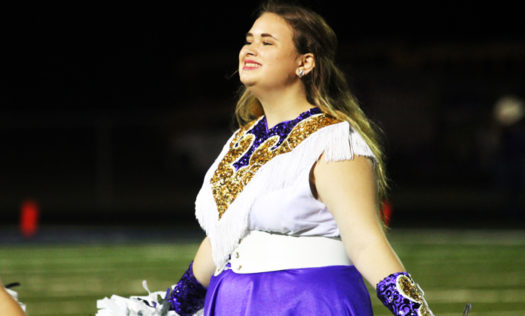 “It’s a guest! It’s a guest!” freshman Millie Lane sings in her role as Mrs. Potts in the high school production of Beauty and the Beast, which is in rehearsals for a December show. Lane loves theatre and was excited to land a role in the production.

“̈Honestly, I was really surprised because I didn’t find out until right after Belle practice,” Lane said. “I was walking out, and Betsy Martinez congratulated me on getting the part.”

Lane is also involved in Bison Belles, OAP, FCCLA and UIL. For the fall, Belle practice has been taking up most of her time.

“Bison Belles is awesome,” Lane said. “I like the atmosphere; everyone is positive and encouraging.”

In her free time, Lane cleans, reads, watches Netflix and vlogs for her lunch table. She enjoys spending time with her grandparents and loves singing and dancing as ways to express herself.

“I would say the most unique thing about me is my laughs,” Lane said. “I have at least 20 different laughs, and they are unique in their own way and make people laugh, too.”

Lane describes herself as outgoing, funny, annoying and as having a bubbly personality. Her best friend, freshman Madeline Howell, agrees that she is very outgoing person who laughs a lot and tries to make everything perfect.

“Talking to my best friends, the lunch table, makes me the happiest because they are strange,” Lane said. Freshman Naidi Dominguez says that Millie ties the whole group together and is a very positive person.

Lane has big plans for her future.

¨I want to go to ACU to become an interior designer,” Lane said. “Hopefully one day I can go on Broadway.” Lane said.