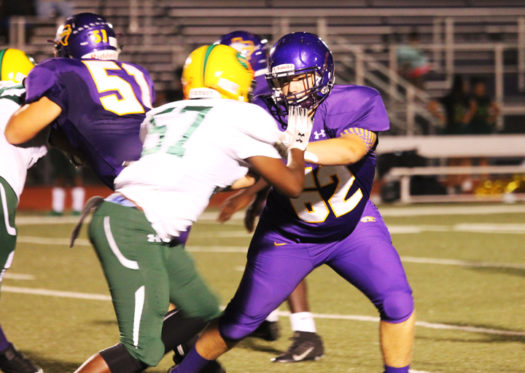 ▲
Freshman Lane Freeman keeps a Gateway player out of the action.
menefee

▲
Freshman Lane Freeman keeps a Gateway player out of the action.
menefee

In the annual Homecoming game, the Buffalo Bison dominated the Dallas Gateway Gators. The game consisted of strong tackles, crownings and plenty of touchdowns throughout the night.

The game began with Buffalo kicking off to Gateway Charter Academy, but soon the ball was taken over by senior Jamual Randle. Later in the game, junior Francisco Saldana scored a 20-yard field goal. The quarter ended with a touchdown by junior Brett Hoffman, followed by a PAT by Saldana, with a score of 10-0.

“I played a really good game that night,” Saldana said. “I managed to score every single field goal.”

The second quarter consisted of two touchdowns made by Hoffman and points added by Saldana. The defensive line showcased their toughness and excellent job of blocking, which made it easier for Hoffman to score touchdowns.

“Overall, the D-line handled their assignments really well,” junior Asa Henson said. “We did best on eliminating the inside rushing attack, but our pass rush was something that was lacking at times.”

After the crowning of Kimberly Guevara and Roberto Garica during halftime, the Buffalo Bison were ready to finish the game and add another win to their season. Towards the end of the 3rd quarter, the ball was caught by freshman Kyle Harrison and Hoffman scores once more, and an additional point was added by Saldana.

“I felt a rush of adrenaline once I caught the ball,” Harrison said. “I was pretty excited because it resulted in a touchdown for the team.”

Sophomore Catch Thompson started off the final quarter with an interception and ran 84 yards towards a touchdown and again Saldana scores the extra point. However, the Gators managed to get passed the Bison and score their first touchdown. With a few minutes remaining in the game, senior James Phillips rushed through the Gators scoring the last touchdown of the game as well as Saldana with the field goal, making the final score 52-6.

“I was getting really tired until I got the ball and then I began to sprint,” Thompson said. “I was having a horrible game until the crowd picked me up and help me have one of my best games.”

The Bison will play in the Bulldog Stadium tonight at 7:30.

“We’re going to come out excited and pumped up to play because this a big game,” junior Benito Avila said. “The only way we can win is to be physical against them and play tough.”