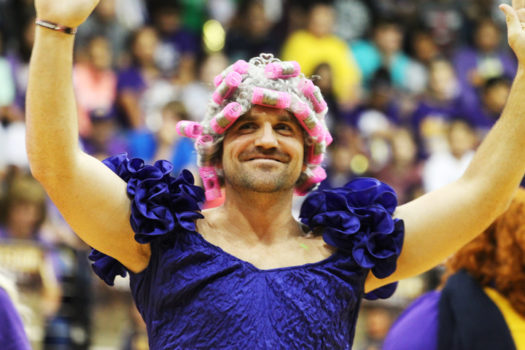 The term beauty pageant took on a whole new meaning for the audience at this year’s Homecoming pep rally.

Cheer sponsor Cheryl Lack, counselor Debbie Read and Principal Corey Hickerson came up with the idea to have a Homecoming beauty pageant during the Purple Out pep rally.

“Mr. Hickerson suggested the idea to have a beauty pageant as a pep rally game,” Lack said. “Right away I knew that was a perfect idea, and we got right to planning.”

“It was fantastic, a once in a lifetime experience,” Hickerson said. “I would do it again because it’s all about school spirit.”

Contestants showed off their outfits as they were introduced, answered questions and had a chance to show off their best dance moves as part of the contest. Some of the dances got a little up-close and personal, according to the judges, seniors Landon Folosm, John Vaughn and Ernesto Dominguez, along with junior Asa Henson.

“It was very flattering to get a dance from Hickerson,” Vaughn said. “With all of the judge’s interaction, it made the pageant even better.”

In the end, Hickerson was crowned queen and wore the crown with pride.

“I was so excited to have won,” Hickerson said. “No matter what, I will always be the first Miss BHS Homecoming Beauty Pageant Queen.”