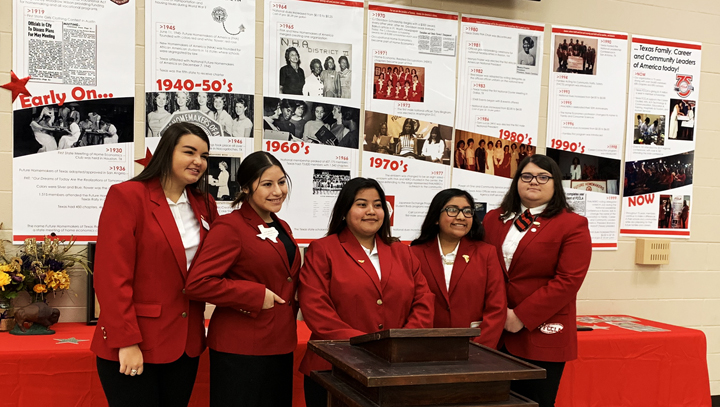 The 2019 Buffalo Ex-Student meeting was last Saturday at the high school. This year FHA/FCCLA is celebrating its 75th anniversary, and the organization played a big part in the meeting this year. The theme is “Our legacy, your future.” BHS Officers have made it their mission to promote and publicize FCCLA this year, and each spoke about the changes from FHA to FCCLA.

Mrs. Barbara Huebner shared her 37 years of experience in Future Homemakers of America with the students. Huebner taught at BHS for 12 years and had an amazing FHA program with regional officers, state officer Lanna Rushing Cantrell and a CJ Davidson scholarship recipient.

“I feel so honored to see that the work that I did so many years ago with FHA and FHA Hero has not been forgotten,” Huebner said. “I am proud of the BHS FCCLA chapter and what they are accomplishing. I helped mentor younger FHA teachers in the area like Barbara Richter from Madisonville, who later became the FHA teacher that Ms. Melissa Isaacs did her student teacher under, so in a way I feel like I am still part of what is happening in Family and consumer sciences at BHS.”

The FCCLA officers made some very important changes for some of the Ex-Students, including lifetime membership fees. The officers asked all of the ex-students to share some of their memories from their time in FHA or FCCLA.

“As part of this year-long 75th Anniversary celebration, we want to tell the story of Buffalo High School’s FHA/ FCCLA legacy,” State VP of Service Learning Callie Harter said. “We asked the group to share their memories.”

Also in attendance was Mrs. April Gross Jones, who served as Region IV President under Mrs. Christy Wakefield in 1995/96. Jones donated her FHA Hero officer jacket to Buffalo FCCLA and shared her experiences as a regional officer with the group.

“It was such an honor to be able to talk to Mrs. Jones about her time as a Region IV President and get to see her input on FCCLA,” officer Jorge Castro said. “The accomplishments and the way the STAAR events work now and then are just amazing to learn about.”

All of the local FCCLA officers came to the ex-students meeting and had a chance to interview officers from long ago when FCCLA was just FHA.

“It was great to finally meet the legendary Mrs. Huebner in person that my mentor idolized and referenced often during her career.” adviser Melissa Isaacs said, “It is very cool that a BHS graduate and teacher helped shape my experiences in FHA Hero and that I am now an FCCLA teacher at BHS.”