GEMS meet for the first time this year 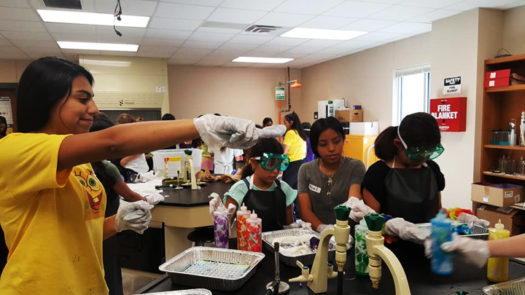 The young girls squealed and giggled as they ate their snacks in the cafeteria. They visited with each other until it was time to begin their fun task for the day.

“The GEMS meeting was really fun,” junior Betsy Martinez said. “It started off to a great start and you could tell that the little girls had a blast.”

All the girls went into the science classroom to watch The Magic School Bus. While the girls were watching the movie, the Big GEMS, who are the leaders, were getting assigned to two younger girls to work with.

“The girls that I was assigned were great to work with and very nice,” sophomore Saloni Jariwala said. “I hope to work with them more the next time.”

As the girls entered the laboratory, they saw t-shirts, rubber bands, and tie-dye bottles. As many girls guessed it, they were making their own tie-dye GEMS shirt that was going to be used for the rest of the year.

“I think it was a good idea because the little GEMS got to make their own shirts from heart,” sophomore Hannah Travis said. “Whenever they look at the shirts, they are going to see their own cute creations.”

There were four stations for the girls to go through. The first one was putting on safety lab equipment and choosing their T-shirt size. Next, the girls tied their shirts with rubber bands choosing from three different styles: a spiral, vertical stripes or a horizontal design. After that station, the girls dumped their shirts in a mixture of baking soda and water and finally got to experiment with the different colors of dye for their shirts.

“I think it is a good idea for girls to get a head start in the science and engineering field,” sophomore Kyla Harmon said. “The girls had a really fun time while they were experimenting with different colors.”

After the girls finished with their lab, they were sent into another room where they had to answer a few questions and write a hypothesis of what they thought the shirts were going to look like. Once they were finished, they went back into the first room to finish watching The Magic School Bus.

“All the girls had unique responses and hypotheses,” freshman Pari Jariwala said. “I think that GEMS is preparing the girls for bigger experiments in the future.”