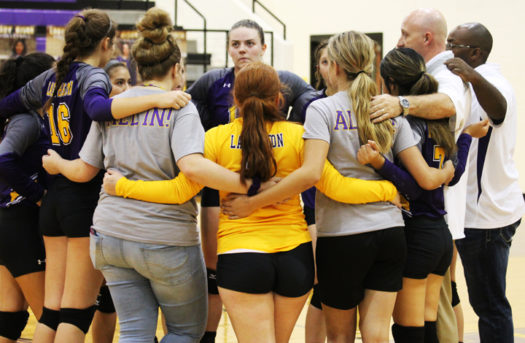 ▲
The Lady Bison huddle in a time-out during their game against Frankston.
menefee

▲
The Lady Bison huddle in a time-out during their game against Frankston.
menefee

The volleyball team started district off with a bang. After winning against Westwood and Frankston, they took a loss against Teague; a loss against Elkhart was followed by a win on Homecoming night against Crockett. A game against Groesbeck tonight will wrap up the first half of district play. The girls are still at work, practicing every day to get better, and are still hopeful that they can gain a playoff berth.

“I was really excited for district to get here,” senior Mollie Dittmar said. “So far I think we have been doing a great job. We have our ups and downs, but we have been working together as a team.”

Buffalo students have been really supportive of the volleyball team. They made their own student section and cheer the girls on during their home games.

“We really appreciated the students coming to support us during our game against Frankston,” senior Rylee Reeves said.  “They were really cheerful and loud, which motivated us to work harder.”

The team has been practicing since the beginning of August, prepping for district with tournaments and preseason play. According to the girls, they have improved together as a whole.

“Now that district is here, we push ourselves much more,” freshman Alison Bing said. “As a team, we have worked together and improved our skills, and I think it is showing now in our games at district.”