Picture of the Week: Julissa Lechuga 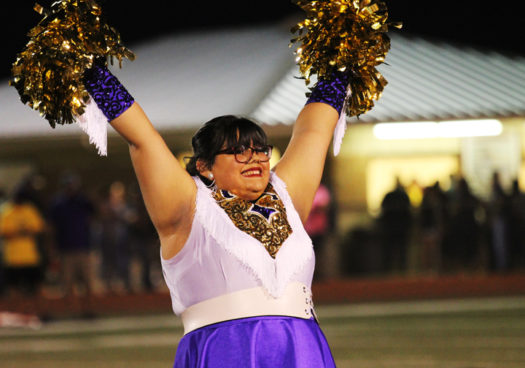 ▲
Julissa Lechuga hits her ending perfectly during the halftime show against Westwood.
menefee

▲
Julissa Lechuga hits her ending perfectly during the halftime show against Westwood.
menefee

Even if you mess up, just smile and keep on dancing.

Freshman Julissa Lechuga hit the dance nearly perfectly during the halftime show at the Gold Out game. She had made a mistake during the pep rally that afternoon, and she did not want to mess up again.

“In the back of my mind, I knew I had to put my arms up and not down and also be sharp,” Lechuga said. “I think it was that I felt nervous because it was my first pep rally dance and there were a lot of people but I have gotten used to performing on the field.”

She redeemed herself from the mistake she made during the pep rally dance.

“I don’t know how to explain it, she just nailed it and I could tell how proud she was in the last position,” Bison Belle director Melissa Isaacs said. “Being a Belle is more than just dancing: it also comes with mental preparation, and she has come a long way. I’m proud of how hard she works.”