Picture of the Week: Brett Hoffman 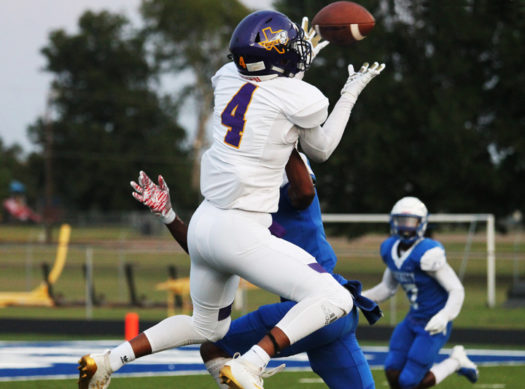 ▲
Senior Jamaul Randle gets high in the air to receive a pass from quarterback Brett Hoffman.
menefee

▲
Senior Jamaul Randle gets high in the air to receive a pass from quarterback Brett Hoffman.
menefee

As the play for offense starts, he speeds off to get away from the opponent. From the corner of his eye, he sees the cheerleaders cheering and the crowd sitting on the edge of their seats waiting for the ball to be in his hands.

On September 3 the Bison traveled to Crockett to face the bulldogs to start off the season. In the end, the Bison were defeated 21-44.

Junior Brett Hoffman made a 26-yard pass to senior Jamal Randle, who had to jump over the opponent to catch the ball for the Bison. After he caught the pass, he was brought down by the Bulldogs.

“I think we did good for the first game of the season, but personally my performance wasn’t good,” Randle said. “My goal for this next game is to break away faster from the defense and to focus more about where the ball is going to land to catch it.”

The offensive coach, Paul Heintze, was guiding this play since every time the play was run the location of the ball is not consistent.

“When the play started and I saw where Hoffman threw the ball, I was like ‘oh no’ and I thought that Jamal wouldn’t catch it,” Heintze said. “But I was satisfied and pleased that he did, and I know he’ll try to do better the next game.”