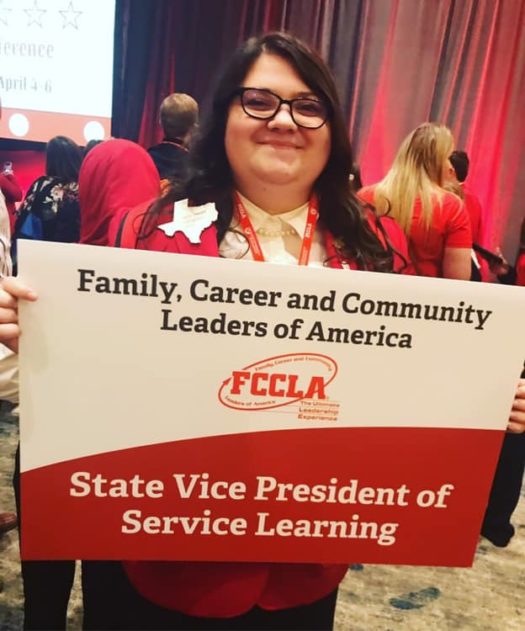 COME ONE, COME ALL …

It was a circus-themed event for the FCCLA State convention this year. On Wednesday afternoon, 37 local members headed to Dallas to compete and volunteer at the event.

National Programs in Action Junior and Senior competed on Thursday. The groups prepared themselves for their competition, worked on last-minute preparations and practiced their speeches.

“I was really nervous but glad to get it over with and not stress out about it,” freshman Sherlynn Rodriguez said. “My teammates and I practiced over and over until we got the hang of it.”

The rest of the members who weren’t competing; they had a whole different schedule to go by. They were room consultants and worked as timekeepers, runners or door monitors to help the events run smoothly.

The members were constantly running place to place at the Dallas Convention Center, from the 37th floor in the Sheraton Hotel to the lobby.

“It was honestly tiring because I was running back and forth from where the event was held in heels,” senior Mykayla Dennix said. “I had to wait until the event was done to eat, but it was worth it.”

By being room consultants in various events, from a focus on children to helping a chef, the members got a sense behind the scenes of what the judges do and say before, during and after a team’s presentation.

“I learned that we almost lost ten points since my team didn’t have a physical copy of our portfolios and that the judges look for grammar, spelling and punctuation errors,” sophomore Scarlet Carrillo said. “I learned what the judges like to see and how to interact with them.”

The rest of the teams did not compete until Friday.

“I was very anxious because my team and I were competing against 24 teams and there is just a lot of pressure,” sophomore Dayani Compean said. “Thursday was a distraction because first I saw other teams compete, and second I made a friend and talked about FCCLA.”

On Friday, the rest of the teams competed. Some events did not finish until 5:00 p.m. and so the participants had time to rest, relax and eat while they waited for the general session.

“My team and I practiced in the morning and then hung out in the food court until it was our time to compete,” freshman Emma Adams said. “We were nervous about competing in the afternoon because we were afraid that the judges wouldn’t remember us.”

“I was so excited when I found out that Trent Shelton was speaking at the general session,” junior Itzy Velazquez said. “I’ve watched all his videos and speeches and have followed his journey as a speaker. ”

“It was a great honor and it was really unexpected but it was a great experience,” Dominguez said. “I was surprised and didn’t think we would make it that far.”

“I’m pretty sure it’s the first time in Buffalo FCCLA to have three teams qualify for Nationals,” advisor Melissa Isaacs said. “The hardest thing to do is place first or second at state and Environmental Ambassador team got a perfect score.”

Sophomore Callie Harter was elected State Vice President of Service Learning and will be a Voting Delegate at the National Conference.

“I was scared at first since the interview wasn’t what I expected until I got the position that I wanted,” Harter said. “I’m proud of all my accomplishments in FCCLA.”