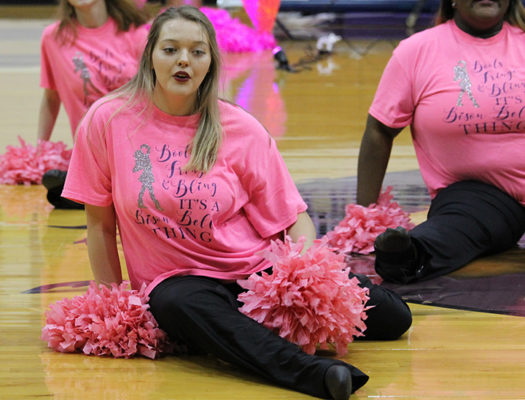 ▲
Sophomore Mollie Doss dances with the Belles at the Pink Out Pep Rally.
menefee

▲
Sophomore Mollie Doss dances with the Belles at the Pink Out Pep Rally.
menefee

Undisturbed and light-hearted, Molli Doss is in her second year of high school and she is “directing” her future towards a career behind the camera.

“Filming movies is a really cool concept,” Doss said. “Acting and watching movies can be fun, too, but being able to apply your own special touch makes it even better.”

Doss is involved in art as well as being a member of the Bison Belles and an FCCLA participant. She spends the majority of her free time watching Netflix and reading.

“The Vampire Diaries is one of my all-time favorite television show,” Doss. “I’m obsessed.”

She’s described as inventive and curious by her friends and classmates.

“She’s a great friend,” sophomore Cheyenne Stokes said. “I can talk to her about anything that’s on my mind.”

Her plans after high school include attending a junior college and later transferring into a university to study film making.

“I’m ready for college to teach me all the basics of film,” Doss said. “Hopefully, I get to make movies soon after my studies.”