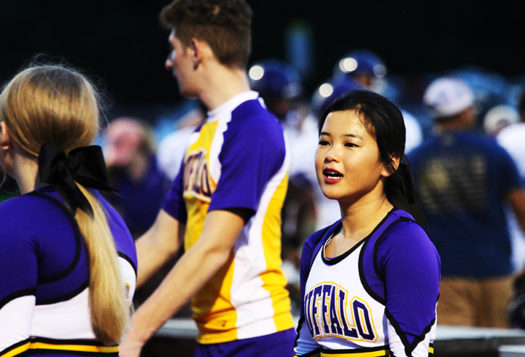 ▲
Junior Jordan Early cheers on the sidelines at the Westwood football game.
menefee

▲
Junior Jordan Early cheers on the sidelines at the Westwood football game.
menefee

Junior Jordan Early is a first-year cheerleader for the Bison. Being able to cheer with her sister, Jazlynn Early, motivated Jordan to try out her sophomore year.

¨My sister and I don’t spend much time together,¨ Early said. ¨Cheering with her brought us closer together.¨

Early was initially on the volleyball team because she had played since seventh grade. However, she gave up that sport to focus on being the top of her class and cheer.

¨Jordan is a really smart and bright girl,¨ junior Mollie Dittmar ¨I´m sad that I didn’t get to play volleyball with her this year.¨

Jordan is currently ranked in the top 10 percent of her class. She plans to attend the University of Texas in Austin.

¨I try to keep my grades up so that I can attend UT,¨ Early said. ¨I want to become a neonatal nurse.¨

When Jordan is not busy with cheer and school, she likes to watch Netflix and YouTube. Her favorite shows include Teen Wolf, The Kissing Booth, and The Ranch.

¨I watch a lot of Netflix, ”Early said. ¨I have seen so many shows that it’s hard to keep track of all the shows I’ve watched.¨