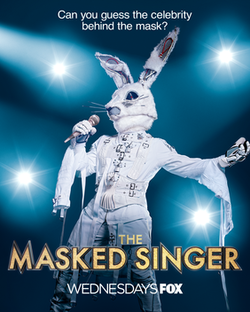 The Masked Singer is a new celebrity singing competition that has quickly become one of the most popular shows on television. The show is an American spin-off of the Korean show, King of Mask Singer. The first episode of The Masked Singer “Mask On Face Off” aired on January 2, and was such a hit, that after six episodes, FOX renewed it for a second season.

On The Masked Singer, twelve celebrities compete anonymously, while wearing elaborate costumes/masks, and the judges have to try to guess who is singing. Before the masked performers sing, a clip containing hints to the performer’s identity is shown to the judges, audience, and viewers. No one on the show, not even the backstage people know who these performers are because from the time they get there, to the time they leave, they’re hidden behind a mask, and when they’re not singing, their voices are disguised. On each episode, a few of the competitors are paired together to face-off against each other. Each performer gets to perform for the judges and a live audience, a song that they choose. The judges and audience vote for the best and worst singer from each face-off, and the overall winner is safe for the week, while the losers are put up for elimination. At the end of each episode, the eliminated singer is announced, and they have to unmask and reveal their identity.

The Masked Singer is different from any other show I have ever watched but in a good way. Last year when I saw the commercials for it, I thought it would be like a celebrity edition of the Voice, but I was wrong. It turned out to be a mysterious guessing game that everyone can participate in. The show is easy to get into, and entertaining to watch. I love how the show makes it a challenge to figure out who is behind the mask. It’s fun to try and guess who the performers are. My favorite thing about this show is the costumes. They are so elaborate and either really pretty or really weird. This season, there was a monster, bee, poodle, alien, lion, rabbit, unicorn, pineapple, raven, peacock, deer and hippo. I think my favorite masked performer was the lion or the bee. However, there was one thing that I didn’t like about the show, and that was how short the season was. Hopefully, next season will be longer than 10 episodes. Other than that, I loved the show and would recommend it to anyone.

Overall, if you enjoy reality television, singing, mystery, and celebrities, then The Masked Singer, is the show to watch. If you are interested in watching The Masked Singer, new episodes air Wednesday nights on FOX. I can hardly wait for the next season to begin.