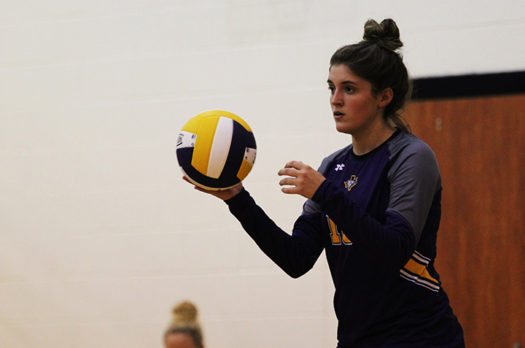 ▲
Sophomore Justice Herrera gets set to serve during a volleyball match.
menefee

▲
Sophomore Justice Herrera gets set to serve during a volleyball match.
menefee

Sophomore Justice Herrera spends most of her time playing sports. Herrera is on the Lady Bison Varsity volleyball team as a hitter. In addition to volleyball, she runs track and plays softball.

“My favorite sport is volleyball because when I’m on the court nothing else matters,” Herrera said. “It also relieves a lot of stress.”

In her spare time, she likes to do makeup and hang out with friends at McDonalds.

“Justice is a very outgoing person that isn’t afraid to speak her mind,” freshman Kami Sotelo said. “When you are around her it is never a dull moment.”

“I really like forensics and anything to do with like criminal stuff,” Herrera said. “It’s all really cool and they way they do stuff is cool too.”

Herrera sees herself as an outgoing person, an easy target to make her smile, open minded, and very athletic.

“Justice really is a work of art,” head volleyball coach Daryl Skelton said. “She is always laughing and playing around, but when it comes to working hard she sets her mind to work even if it takes her a bit to calm down.”