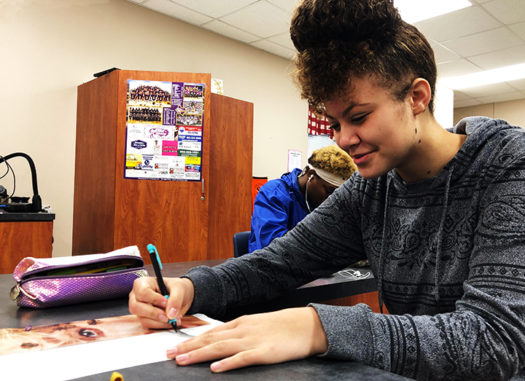 Woosh! The ball passed over the net. I got it! I got it! Freshman Aryonna Coleman gets the first bump of the play and passes it over to her teammates.

“When I’m playing volleyball I get this rush and I don’t focus on anything else besides the ball,” Coleman said. “All I’m thinking of is passing it to my teammates and winning.”

Coleman has been playing volleyball for two years. She decided to join after being encouraged by her classmates, coaches, and her cousins, who played volleyball in college.

“I would always hear about how great and fun volleyball was from my cousins,” Coleman said. “When sign-ups came along people kept telling me ‘Oh you’re tall! You’ll do great,’ so I decided to join.”

Besides volleyball, Coleman has also played softball since kindergarten but stopped in sixth grade because her mom’s job always made them move around. She has decided to play again this year.

“I’m really excited to play softball again,” Coleman said. “I remember playing with all my friends and really enjoying myself.”

She has also played basketball but stopped because she wanted to focus more on softball. She’s also in student council, FCCLA and is a class officer.

“She’s really fit to be a leader,” freshman Omar Almeida said. “She’s outgoing and loud which are great qualities.”

After high school, she plans to attend a college in-state to become a pediatric nurse or a psychiatrist. She loves helping people and working with children because they’re cute.

“I have many siblings which I think made it easier for me to communicate with adults and children,” Coleman said. “I really enjoy talking with kids because they’re really funny.”