Rescued dog turns out to be wolf 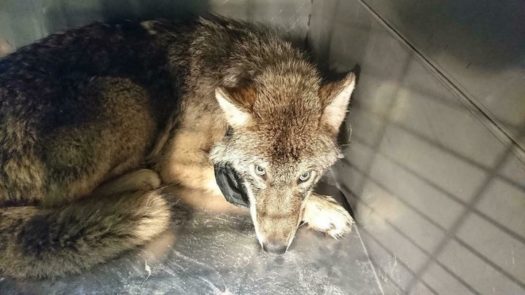 Last week, Estonian construction workers rescued a young wolf from a frozen river in Estonia. The workers spotted, what they thought was a distressed dog in icy water while working on the Sindi dam on the Parnu River. Instead of leaving the animal there to freeze, the men cleared a path through the ice, pulled the canine from the water, loaded it in their car then drove it to a veterinary clinic.

When the workers arrived at the clinic, the canine was docile. However, veterinarians were a bit suspicious about the dog, because it was so large and weighted quite a bit. A hunter, familiar with the wolves in the area, confirmed that the dog was actually a one-year-old male wolf. The wolf was treated for low blood pressure, hypothermia, shock, and parasites, before being fitted with a GPS tracker and released back into the wild the following day.

Estonia is home to hundreds of wolves. However, the species usually avoid humans, so only a handful have ever been collared.