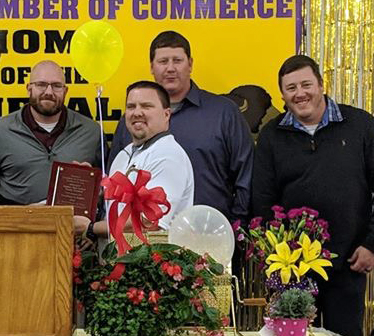 Last week, the football coaches were honored at the annual Chamber of Commerce dinner. The group was formally applauded for all of their hard work and dedication towards the football players and the outcome of this season. Principal Corey Hickerson spoke about the accomplishments of the coaches.

“This year, the football coaching staff has made history in every aspect,” Hickerson said. “An almost-perfect district season paired with making it to round three of playoffs really set the tone for the rest of the year.”

This is the first year in Bison history that the football team made it to the third round of playoffs. This is attributed to the talent of the athletes but more importantly, the coaches that led them to that victory.

“As my first year coaching in Buffalo, I couldn’t have been more blessed with a better group of players,” defensive coordinator Roger Masters said. “These kids work so hard and deserve all the success.”

“It was really special to me that we were honored in that way because I’ve never been recognized like that before,” coach Paul Heintze said. “It meant a lot to me and it spoke a lot about the staff in Buffalo.”

After an almost-perfect season and making playoff history, according to the coaching staff, they are more than ready to take on next year.

“I remember that last game like it was yesterday,” Head coach Brandon Houston said. “It was a bittersweet moment because I knew the season was over but I couldn’t have been more proud of my coaches and my players.”